This picture is terrible. Im trying to purse my lips. Like I could be that kind of model. 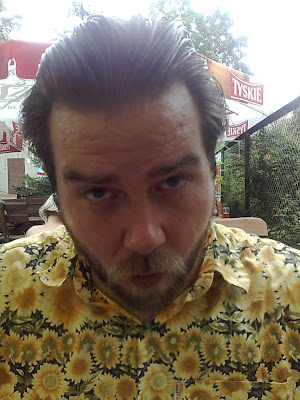 Even my hand is posing. See how unrelaxed it seems.
I love the armband. My wifes grandmother gave it to me (God bless her goodness). Its a handmade Olga M. Dahl and crafted by an half-ancient pattern called The Kings Pattern. Rings are both from the wife.
In Christiania we where chatting with some old moviedirector over beers and joints in this perfect cafe so full of people that everybody was sharing picknicktables with strangers. (Sorry "No Photo"-rule is strictly enforced in that part of Christiania.) The director thougth I was a gangster because of the thumbring. When we where crossing the swedish-norwegian border, we where searched by customs for 2 hours; and had to wait for atleast one more for the next bus --- and I suspect the jewelery was part of the reason they chose us for inspection. My Christiania-cap was hidden, so it couldnt have been that.
But seriously I didnt know thumb-rings was a gangster thing? Here I was all worried it might be a gay thing. Please comment your opinion on this and other secret symbols you'd like me to write about. 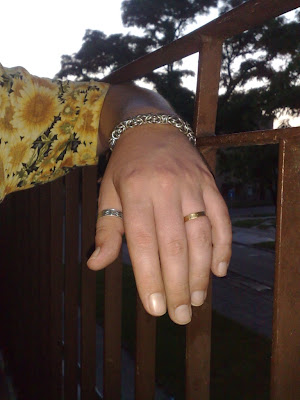 A little better. This is taken on OSL waithing for my plane to Lodz. The people in the background are speaking polish. At this point I've been traveling for about 8-9 hours and I've been drinking for about 5-6. My taxfree-poison is Aquavita and some german brandy that comes in a handy 1dl pocketsize with a cork screw. 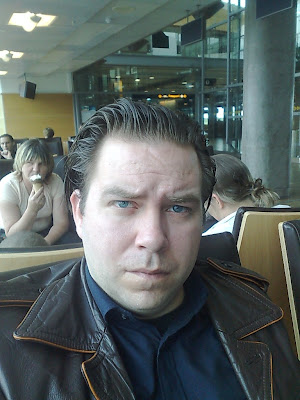 I got the Conan t-shirt for writing some terrible fan-poem for the norwegian version of the magazine. It was written in some kind of makebelive-nynorsk and was about battlebirds devouring your dead eyes on the field of murder; while your soul is feasting in Valhalla.
I hope and belive I will have the courage to die with honour. The old gods are not dead - they are our Lords saints and arch angels: St. Odin will help me prevail like a man through all ordeals of battle, danger and betrayal. 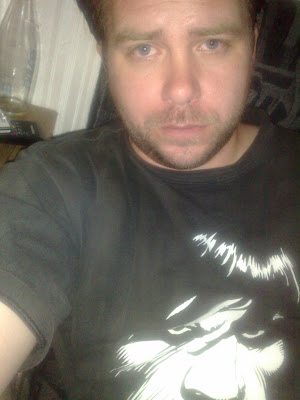 This one did'nt turn out to bad. Kitty Oblonskij took it. If you look closely you can just make out "BEST FOOD BY TOM MALDON" below the Sphinx sign. I've never heard of this Tom Maldon-character, and I cant be bothered to google him, but it seems very reassuring doesnt it? Like he has been on television or something. A celebrity. A man with a reputation to protect.
The food and service is so good, the meat so perfectly spiced I hardly belive the crappy sauses they are serving. If Tom Maldon only knew! 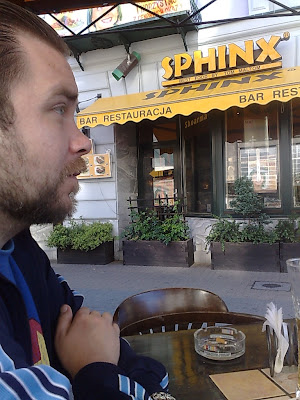