The political-liberal blogger Pleym hath some opinions on freedom, laws and Ghandi-style smuggling and partying. While he don't acctually agree with norwegian liberal party Venstre, thats the party he is a member of. In the coming election freedom-minded electors should ponder on the fact that freedom-extremists choose this party and not the other "liberal" party, FrP.
I have great hopes for Venstre - once the current leadership is either removed, or start fighting their political battles in the brave new world the rest of us are living in, they just might become a party for the generations of free souls our struggles have won us from the eigthies and up.
(If you didnt get that last part, thats ok. Just trust me. They, like, like, rock, man!) 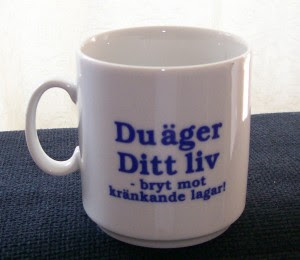 Swedish text: You own Your life - break demeaning laws!
Posted by MatsHanssen at 10.8.09