Katharine Kerr's Deverry cycle is a fanatasy series of 15 books. While she's not writing high fantasy - compared to masters of yesteryore like J.R.R. & Lord Dunsany, "the" man who inspired him - her wordsmithing has crafted something far better than your average, mediocre and superfluous modern fantasy.
(Late fantasy writer Robert Jordan could be an example of such - his Wheel of Time is truly grand through books 1-3; then comes 10 volumes of wearysome crappola before the unsupressed rage of his 100 000+ readers does its magic and sends his weak and greedy heart to an early grave. Heartattack I think they called it.) 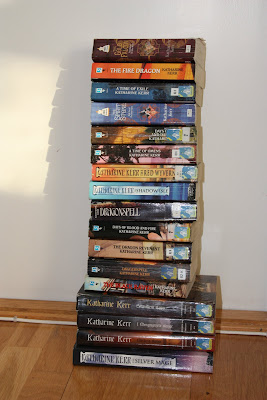 I'd heard goodly praise of Kerrs cycle from several individuals (mayhap not strange since the first book Daggerspell came in 1986); but said Jordan thaugth me to stay far away from anything unfinished. When I heard the last book was out early winter 2009 I did start to read it, and I enjoyed it enough to buy the rest books once I'd finished the 3 first volumes availiable in our local library. (Btw: It is more than passing strange to me that the last book was available in paperback at bokkilden.no but not at amazon.com - selling off their good rep for a few kindles now are they?)
As a writer Kerr is quite capable, but she has resorted to too many shortcuts: copy/paste of descriptions and explanations is unworthy even, methinkst, Jordan, Forgotten Realms and such. Some passages/chapters can feel unduly long, saying what could have been said in 2 pages in 30 and such; and her repetitious technique of forshadowing who the main protagoinst is will be in the next paragraph will, as such things go, at first delight and later on simply annoy.
I have the same mixed feeling when it comes to her naming of the characters. Like me she does like her names to have meanings; and some of her names are simply genious: Like main character (atleast in the first few books) Nevyn(=Noone), and the reincarnated king gone mercenary Yraen(=Iron). Other times she chooses names that, while having good etymological roots, do give the whole thing more of a buccaneer-romance-novel feel than my refined and somewhat vain nature can deal with. I am, of course, escpesially thinking of Rhodry(=Rhodorix=Roseking) and Jill(=Girl). I mean, buccaneer romances aside, Rhodry? That sounds like somewhat you might call your cock.
And Im sure Jack misses Jill, so I guess its a good thing Kerr does'nt need her anymore.
Her take on magic (of a mostly hermeneuitc tradition) is the best 'daily life' description I've read by any autor in the genre - but sadly her knowledge is purly academic and there is little to learn for students of the arcane. Her portrayal of the dark arts are mostly written in the early ninties and it shows; she is clearly inspired by her times. I find it sad, and it be evil wyrd on her, that these arts are reduced to simply beeing money, drugs, blood, homosexuality and pædophilia. Escpecially when she knows enough of the light to easily revert it without making 2-dimesional evil sorcerers.
The central theme of the Deverry cycle is 'wyrd' ('fate' or even karma); and that is a truly a wholesome theme. That your actions will have consequenses; in this life or the next is such a pedagogic analogy it does'nt even matter if its true or not.
On the other hand: The notion that males are mostly reborn as males and vice verca; is likly a most harmfull notion to propagate - but it does make for an easier read and I suspect Kerr simply isn't skillfull enough to let a soul shine through a character in several rebirths of different sex and strata.
Anywhoo: recomended for anyone who wants an easy and wholesome read - especially students of english and fantasy lovers. If you can't finish it in a year you really should take a long hard look at your life...
Posted by MatsHanssen at 13.2.10