Norways sexyestest dialect was recently found to be the northern tounge in a survey done for the site purdialekt.no by InFact, reported here by VG. Tore Jahren, the webmaster or boss or whatnot of purdialekt seems a little disapointed as he was quite sure it was the trønder dialect that was the sexiest. (It can still be so to him, thats ok, even if most of us thinks otherwise). He tries explain it with recent successfull artist hailing from the north - mentioning old-timers Albrigthsen and Hoel, funnyman Truls Svendsen and barely legal poppunkrockers Black Sheeps.

Copyright NRK (like the norwegian BBC)
He is neglecting to mention Bodø/northern superstar Joddski who, in his breaktrough hit said he'd qouth 'Leave your lady with sperm dripping from her chin' unquoth (a lot is sadly lost in translation here). Does'nt matter; there is no law against making a fool out of yourself. I do it all the time myself ;)

VG tries to solve this "mystery" by interviewing Jørn Hoel, once voted Norways sexyest male. He speaks about the sensuality of northern swearing. I, myself, is a proud speaker said tounge, have other theories: First of all; simply try some... northern tounge that is.
Second, and more boring perhaps, has to do with the evolution of said tounge. Life in the north was always rich and hard. My family had this myth that we were O'so poor; at the same time it is told of one of the great, but perhaps eccentric, pater familias that if his woman did not have the water boiling when he acame rowing with his catch of cod and salmon and whatnot he threw the fish away and they would have to eat only potatoes that day. Because he would only eat fresh fish.
My uncle pointed out to me that poor people neigther throws food nor sits in the church councils. Not in the 1850's anyway. I digress. Northerners might not always have had wheat and fresh vegetables; but we've had aplenty of both protein rich fish and the neccesary vitamins and such from rich yields of berries. The story of the freshfisheating forefather is probably a special, if not singular, case: but few, if any, have gone hungry and physicaly underdeveloped here.
That said. Life truly was, and in some ways still is, hard north of the polar circle. (Or the moral circle as it is called in navy slang). Dying is easy in a rowboat in the winter storms (a miniaturised vikingship with a crew of 17 [fembøring] was the standard) . If you study the churchbooks and genealogies you'll find it was quite normal for a woman to be widowed circa twice. 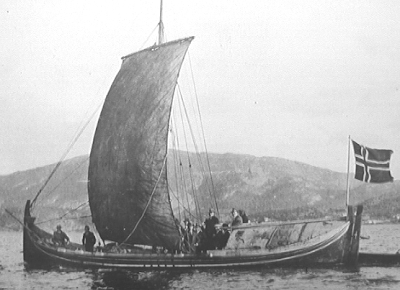 Now, what will life like this do to a dialect? Months in the dark confined to eating and fucking in your small house. Months of glorious rich summers with neverending days. Shouting from one boat to the next in storms. (I have never been outmatched by a southerner in a shoutingcontest). Whispering of love, to your love, knowing that every time you dare the straigths very well could be your last.
Any northerner who has traveled a bit can tell you; once you cross that line, that polar circle, you realize that all southerners seem... fragile. Cold. Weak. But you don't mention it, because you don't want to... you know, make them loose face. But all of us know - when shit goes down - you don't want weaklings in your boat.
Posted by MatsHanssen at 27.2.10