[Long personal rambling warning: start below the picture to get the meat of it.]
I always were a freedom-minded fellow; as a young man I had little & close to nothing to do with narcotics -- but I always swung towards the decriminalization of drugs.
Perhaps my liberal-mindedness towards this inflamed issue, even as a boy, was a result of my mother working as a drug-fiend therapist and my fathers background in outreach socialwork. But probably not; it is first in later years I've heard either of my most honoured progenitors utter anything close to critique of the current regime.
I used to be a non-commital whatever, I guess I'm for legalization-sort of fellow. That all changed when I went to jail in 2001 (on a non-drug related charge). Bodø Jail have 55 cells ("rooms" they call it - if you dare to call it a cell, you get a rebuke).
The first thing I noticed is that only 3 (!) of the cells were for women, and half the time there were only 1 or 2 female inmates. (While I had to wait 8 months from sentencing to serving - and the only reason it went that quickly was that my lawyer, at my behest, used his formidable skills to push that date to the earliest possible.)
I was studying sociology at the time, and I naturally spendt a lot of time trying to figure out the why of that disturbing fact. The academic & common sense explanation involving testosterone, male culture and the psycology of the rover et cetera seemed... paternal - and it does'nt give academic (or other) feminism much credit that the subject (to the best of my knowledge) never have been explored even by the oestrogen mafia.
The only answer I got from my peers, them other inmates that is, was that "we [men] do our womens time in jail". That, ofcourse, is honourable, the thougth of it makes me proud of my people. But other information (from supremly experienced users) - not necesarily condoned by science, mind you! - indicates that the female of the species (or atleast of the culture) are more susceptible to addiction than the male. They don't fall as often as 'us', but when they do fall, they fall hard. To me, that makes that honourable gesture seem somewhat dubious. Do they always have a man willing to take the rap? Atleast some of them must be single?
Drugusers generally makes for poor spouses; and on top of that: after a few years of hard use, no matter how well you deal with the daily strife of intoxication and addiction: your body is worn and generally not that sexy or even appealing anymore, and your mind is whaddled and nervous (even on drugs).
When I finally realized the simple why-of-it I grew angry. Very fucking angry: A woman will simply prostitute herself. Sometimes as a bonafide hooker - working the streets or the luxury market. More often she will find a user who provides for her. Beeing innocent young men (playing pen&paper RPGs, doing sports, fiddling with computers and the fledling internett) we had often joked about what we called "hasjhorer" (hasjishwhores): women, girls really, attatching themselves to men who could support their indulging in the holy ganja. Now, take that scornfull observation of the girlfriend-less 17 year old nerdboy and make that hasjwhore 10 years older. Why, o'why, does she still not go to jail? Why will most of them never see the inside of a jail?
A legislation making whores of our sisters, mothers, daugthers made me wrathfull indeed. That, atleast, should be a instinct in any Man - and no amount of therapy has been able to change that feeling (it is easier to live with now, though). But a few hours after that first realization a second hit me: Of the 52 men in the jail we were maybe circa 5 who were inprisoned on non-drug related charges. The official figure for drug-related inprisonments in 2008 is 42%, but the realitytruth you can observe in jail is completly different.
Few ever manage to get enough drugs on their hands to actually go to jail for it. Most seem to wind up in jail either trying to get [the money for] drugs; or as a result of their outlaw subculture underground lifestyle. A lifestyle that hardly could have existed on such a scale in a society who frowned upon abuse; but helped the unhappy wretches rather than exile them from good society for the rest of their lives.
I write to much; I was simply going to refer to an article in conservative norwegian newspaper Aftenposten. And I will, below the picture. But keep in mind; 99% of us can not simply take our sentence, do our time and be done with it. Your identity as a criminal will be branded in your soul like a weeping infected wound - and personally I would have prefered beeing lashed in the city square to having spent that precious time unfree. 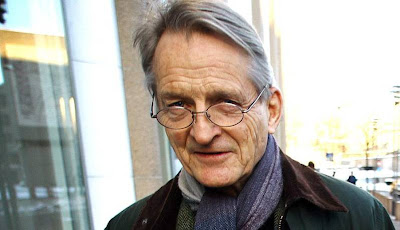 Supreme justice (retired) Ketil Lund. Looks like a wise man, does he not? Add long hair, long beard, a wizards cap and contact lenses and he could be a Gandalf pinup.
In a recent speach (where he speaks up for the decriminalization of narcotics) referred in an Aftenposten article: retired supreme justice Ketil Lund (70) states that "Det har vært rystende for meg å erkjenne hva jeg har vært med på." Normaly I would simply translate that; litteraly it says "It has been shaking for me to recognize what I have been part of." But beeing a supreme justice he has not chosen his words lightly, and the key words here beeing rystende/shaking and erkjenne/recognize.
To be 'rystet' is to experience a personal and unpleasant upheaval. Having caugth your presumed virginal daugther with her boyfriend is normaly not enough to be 'rystet'; walking in on an orgy where the virgin was the center-of-attention would do.
To 'erkjenne' something is even harder to translate. My first 'simple' guess was 'realize'. Google translate suggested recognize. But the [norwegian] word has its roots in german philosopy - who again used it as a translation of the greek "epistemology" (επιστήμη (episteme) and λόγος (logos)). The most famous epistemologist just might be Rene Descartes - who proved/realized/recognized our existence. To 'erkjenne' something is in 'daily use' the deepest level of understanding one can reach without the help of divine and irrational tools such as faith/belif.
And while I had always hoped that 'they' would realize their mistake and recant - I had never thought/hoped/fantasized that even one of them would let the gravity of their mistake put its weigth upon their souls. Wow.
The article is a strong piece for the decriminalisation of drugs. If you want the whole piece -> check it <- if you don't read the most glorious and noble norwegian language... use google translate. And if you, like me, love your god[s] and your people - take Lunds simple statement with you wether you debate the issue with yourselfs or others: We are talking about a policy with dehumanizing folkspsycological effects.
Posted by MatsHanssen at 15.2.10