I just finished reading german master Goethes influential bildungsroman 'Wilhelm Meisters Lehrjahre' (en. Apprenticeship/no. Læreår). In the afterword of my norwegian edition, by translator Sverre Dahl, its said that its one of those novels that everybody has heard about - but only very few have read.
First published in 1795-96 it is suprisingly modern; a quite easy read (even with its 500+ pages) and definitivly worth your time (whomever you might be). It has a few weak passages, and it sort of falls apart in the end - even though the ending in it self is ok, grand and happifull - it's just lacking in execution. But other than that its a great novel, and mostly it is quite inspired.
And aparently it is the first bildnungsroman - a term that is quite inadequatly translatet to coming-of-age novel in english. But then, them anglos (on either side of the pond) have never been much for bildnung - beeing savages and all. One does wonder though; will bildnung, becoming learned men (and women) of virtue and honour ever be fashionable again? Or will striving to better oneself always and in all futurity make one feel old, unfashionable and boring? 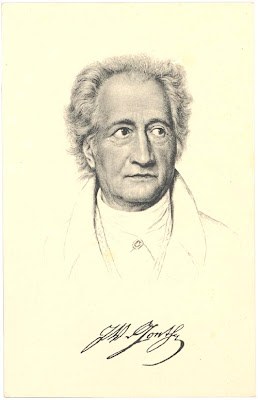 Having read both this'un and the much shorter Young Werthers Sorrows (about a young mans suicidal heartbreak - the original and possibly ultimate emokid black metal gothic novel - no man have the right to wear black eyeliner without having read this masterpiece responsible for so many sensitive young mens premature suicides) I now yearn to read Faust. Herman Hesses version is eminent - but I always found it worthwhile to search out the roots of great things.
Posted by MatsHanssen at 8.2.10