... or Horrific Sufferings of the Mind-Reading Monster Hercules Barefoot - his Wonderfull Love and his Terrible Hatred as it is aptly translated is was presented to me as one of those you-obviously-learned-to-write-in-the-author-academy novels mentioned in an earlier post. And since I felt for just that, feeling a bit under the weather and all, I decided to read what is said to be Carl-Johan Vallgren's best novel. 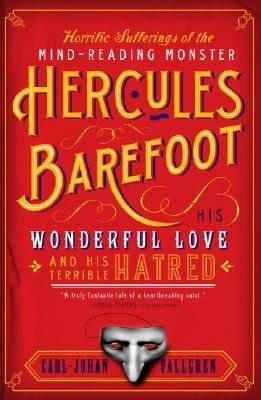 I usually stick to litterature that is 50 years+. I like to say that it's because anything written after the holocaust is crap, but in reality there is a whole conglomerate of reasons for this habit; whereas the most important is that I have little patience with timethiefs, cultural and individual (authoral) vanity and crap. If it survived since before the war you can usually rely on it to be good shit.
Now, also, I usually try not to read blurbs and back-covers on neighter books nor films, and I did'nt this time either. Which I'm very glad for, not because there was much of a reveal, but because the extatic blurbs I found after finishing the novel would have sorley disappointed me if I'd read them up front. Skånska Dagbladet: No! This is not a masterpiece and yes, yes, yes the art of storytelling gets a lot fucking better.
If you want a proper review I'm sure you can find it elsewhere. Vallgrens pathetic exploration of love, language and hate is'nt worth anybodys time. Since I get the impression he is trying to portray Hercule Barefoot as a pretty smart guy... the general stupidity of the thing must be atributed to Vallgren himself.
There used to be a time when artists were afraid of looking stupid. I want that time back as soon as possible. If you want to bother us with your lack of inteligence write a comment right here in the commentsfield, or start your own damn blog! Don't pretend to be an author.
Posted by MatsHanssen at 23.3.10