District 6 in Soweto, South Africa is one of this earths many hells; when you put aliens instead of africans and jews in the Ghetto there is bound to be some controversy. 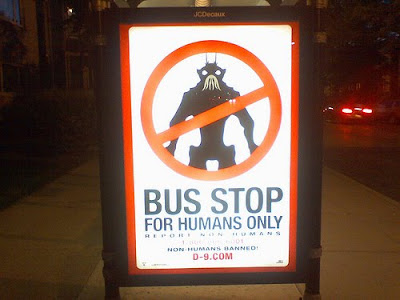 Before I get to that: District 9 was produced by Lord of the Rings-filmmaker Peter Jackson - and because of that I was a little loath to see it. I'm not proud to be one of those wankers who insists he has'nt done anything good since Bad Taste. But there you are, I am.
After having seen it I must say it is a refreshingly different film. It's been said of the film that the sci-fi/action-genre seldom or never gets this good but I just have to mumble aliensmatrixbladerunnerblabla for you to get that thats just hype. 3/4 rewviews on the international movie data base praises the mocumentary effect and says you don't notice when the movie changes pace and becomes a classic 3rd person narrative. I disagree, it might just be me, but I do notice. It just does'nt matter. (There were a lot of Canadians involved in the making of this film - one would assume they are inspired by Canadian comedy/social comment masterpiece (atleast the first few seasons) Trailerpark Boys.) 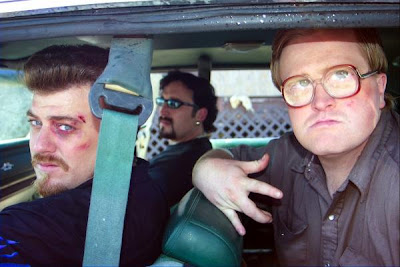 The Trailerpark Boys. The dude in the background is the ghetto Don - you never see him outside of jail without a drink in his hand. He is the canadian version of scandinavian criminal mastermind Egon Olsen.
As to the controversy: Some people have gotten all angry and upset like because of the apartheid connotations. Others have been all happy and uppety. All of them were bleeding heart liberals. The South Africans themselves seem to be mostly proud. So I guess thats ok; allthough the aliens (the prawns as the derogatory term in that reality is) are certainly portrayed pretty closely to what a insensiticed racist probably would view the ghetto people.
The place where the movie has created the most controversy is actually Nigeria where the movie is banned and there aparently even have been public burnings of the dvd. This because of the nasty protrayal of the Nigerian gangs operating in District 9. In an interwiew with the co-writer she regrets ever putting the word "nigerian" in the script, but I do think Nigeria - instead of banning the movie - should take a long look at themselves and ask why they are becoming an international joke - much like the estados unidos.

From xkcd. The mouseover text reads: "We live in a world were there are actual fleets of robot assasins patroling the skies. At some point there, we left the present and entered the future."
Another thing, that admittedly is'nt much of a controversy since I'm the only one worrying about stuff like this (on the whole of the internett), is that this is probably the worst portrayal yet of imagined human/alien-relations. If I were alien I would certainly never go near humans. What if, one day, we do encounter aliens - and even more realisticly - we do manage to create an artificial intelligence... looking at our culture (that is, movies like this and the rest) they would be quite justified to wipe us out. Boom, like.
Damn, and there I was hoping for alien Buddhas and Messiahs; for enlightened artificials and a better tomorrow for all concious and/or feeling life.
Posted by MatsHanssen at 11.3.10