March 8, the internatinal womens day, was this year celebrated by giving the best movie academy award to a female director for the first time ever. My congrats to Katheryn Bigelow.
I just saw it [The Hurt Locker], and while I must admit I have'nt really followed that particular award-competition this year, and thus don't know what opposition she met, I find The Hurt Locker to be a weak movie-of-the-year. 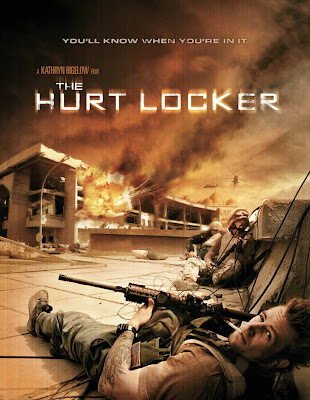 While a decent war-movie, it is a pussy move to use a bomb tech to portray mans love for war and action. But I guess that explains the academy award. Are they getting war-tired already? It's just been, what?, close to 9 years of figthing. Guys that had'nt turned 10 round 9/11 are out there figthing&dying now. Nothing like a good warmovie to boost morale: and who can dislike a man who disarms bombs for a living?
A far better choise if you want to see some Iraqi war from the american perspective is 2008 miniseries Generation Kill (with Skarsgaard jr. as the Iceman); atleast twice as good as The Hurt Locker.
Posted by MatsHanssen at 10.3.10