Corey Haims untimley passage promted me to view The Lost Boys: a movie I havent seen since it's videorelease sometime in 87 or 88. The movie is a horror/comedy, and while quite watchable today it is not at all the great film it once was. 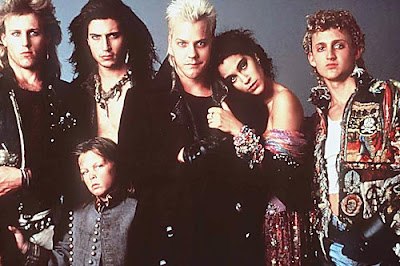 Yes, these are the badguys.
It is said that The Lost Boys started the 'new' vampire trend where vampires more often than not are sexy, cool and smart - and no longer Bela Lugioso-style nosferatu monsters. I doubt the movie 'started' anything - but to be one of the first to pick up on the trend (demand?) of eternal youth is indeed something.
Another interesting thing with this movie is that it only has one nubile woman - but lots and lots and lots of very hot, very cool boys and young men. Targeting teenage girls and gays I guess, not unlike that fad of the last year or so... namley Twilight.
I did'nt notice the lack of girls as a teenage boy. What I did notice, and which holds true even today, is that the music of this movie is truly excellent and sort worth the effort of watching for the soundtrack alone.
Posted by MatsHanssen at 13.3.10