Great anger among Indian christians as the picture below was found in a schoolbook. People have already died. Apparently more people will die before all is over. The same picture has caused controversy several other places in asia.
Looking at this picture I really feel nothing. A little relief perhaps, that I feel nothing. The only upsettnes I ever feel is when 'they' use religious imagery in commercials. Not enough to burn anything though. 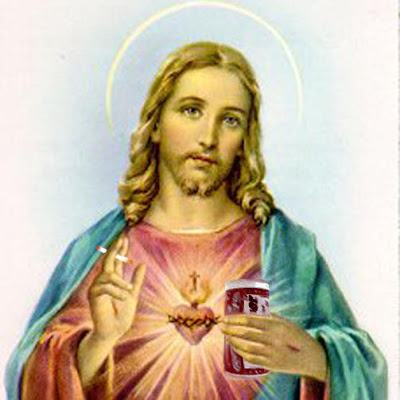 Personaly, if I was an Indian christian I would be more provoked by the blonde Jesus than I would by the smoking and drinking Jesus. I would like to note though that the picture is quite mean... as MY Jesus would'nt touch poisons like this and stick to ganja and wine.
According to the article hinduism is Indias largest religion at 82%, islam is number 2 at 12% and christianity is down there with 2,3% and 24 million of the faith. I sincerly must say I often wondered what the fuzz was about with them Mohamamd caricatures - they speak of the prohibition of making pictures of the holy prophet; but as I've understood it its really a prohibition of making pictures of anything in Gods great creation. But we don't see much fuzz unless the prophet is involved somehow.
The real answer seems to be about respect. And this latest indian fuzz seems to correlate that. I find it hard to imagine any christian european, or even american, getting very upset about a picture showing Jay with a sigarette and a beer. And while its tempting to try to write not-so-funny funny things about race, temperament and temperature: I not only belive notions like that to be benath me, but to be wildly incorrect. As tempting as it can be to blame race; studies have shown that there can be greater genetic differences between two neighbouring african tribes and an african and european.
It simply seems that people (and their memes) when under a certain pressure will tend to overreact. If you start observing you will see it everywhere. It is easy for the king to be forgiving; a bit harder for his mistress.
Posted by MatsHanssen at 4.3.10