My first day as a walking pilgrim I'm up at approximately 5 in the AM - but since I neglected to go to the store the previous night I have to wait til almost 8 o'clock to head out so I can stop by the store. One last picture of the Gradignan pilgrim and then I'm off. 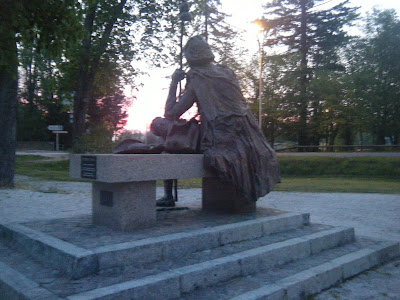 I love walking in the mornings. The temperature is very pleasant. I only have a vague notion of what the day will be like - although I'm not completely unprepared as I've already stocked up on 50+ sunblock. The sign in the background (yes, I was trying to get that, but as with about 90% of my pictures I failed to get what I wanted) is an ad for the same mall my butt-ugly donativo t-shirt is trying to promote. 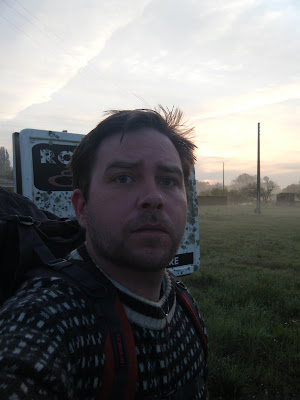 First proper camino roadsign. Happy feeling. Being an ardent opposer of proper preparations I wasn't really sure until this moment that I actually was walking the Tours route to St.Jean Pied-de-Port. 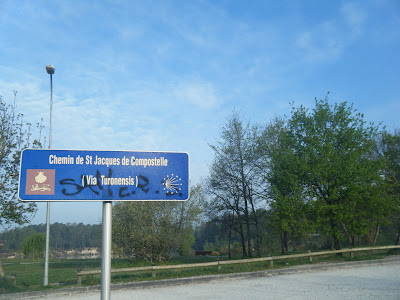 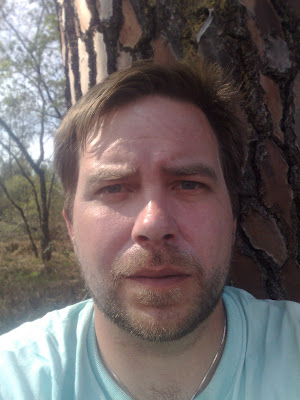 I don't know it yet, but I already lost my way. It's 9:45 in the morning and I've been walking for less than two hours. French roadmarkings are illogical and slightly insane. One road going north into the woods, one asphalt road going straight west. One yellow arrow meticiously placed so it points exactly betwixt the two alternatives.
Having to guess I choose what seems to be the scenic route; my compass seems to agree. And while I'm guessing that compass sent me the wrong way more often than the right - I'm pretty sure I'd still be in France somewhere had I traveled without it.
I don't know it yet: But you are supposed to have a map and a guidebook and a mobile telephone and atleast a rudimentary understanding of the french language and preferably a handheld GPS.
I use the same GPS as my great grandfather used when he was a fisherman - back when GPS still meant God Please Save me/us. 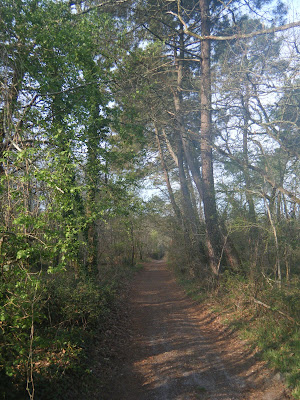 The first part of my straying atleast was very pretty. Later on it mostly looks like this. As usual I'm unable to take pictures of the interesting things - the huge fucking loggingtrucks raping the "national park". Why would I want a picture of something so ugly? I'm just outside of Bordeaux - I'm sure it will pass. I mean, damn it! I'm going into what seems to be Europe's biggest national park! This is going to be SO great! 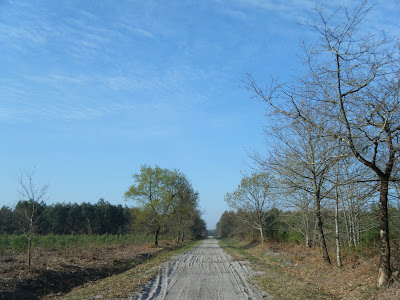 Hmmm... This road seems to be turning more and more to the east. I haven't seen a yellow arrow in several hours. Hmmm... I might have taken a wrong turn somewhere. Should I go back? ... Nah, I'm sure I'll get back on the camino somewhere soon. 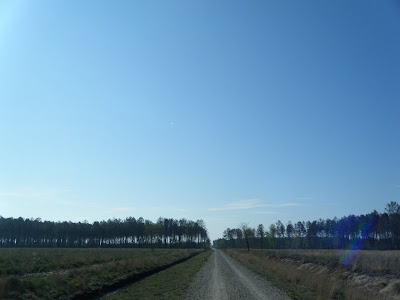 So, anyways, I've walked for about six hours - which would be about 24 kilometres, about 1-2 clicks more than I was supposed to. The day turned out to be quite hot and I've drunk all my water. But its all good! I found a gas-station and bought me another litre of water and I found the road to Ville du Barp! Only 18 clicks to go!
I guess I should have taken a picture of the Ville du Barp roadsign. But hey! If I was good at decisionmaking I wouldn't even be here in the first place, right? And anyways I do love so that they have voluntary gymnastics in France. In Norway you have to pay some hefty fines for not participating - and if you just, you know, do the civil disobedience thing, the deathsquads come and give you a neckshot if the first two beatings doesn't help your "maladjusted attitude".
That's what I love about the internet: it really shows people that a different life is possible! A life without mandatory gymnastics! 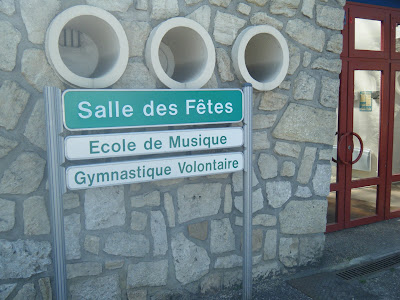 Walking by the road I'm soon realizing that French drivers are all insane. I walk on the left side on the road as I am supposed to - but the road is rather narrow (but you know, I'd rather take a picture of this suffering forrest) and when cars coming from behind on the right side are overtaking/passing eachoter their not really afraid of hitting the guy with the backpack. 20 centimeters is apparently considered good clearance here.
The only solution is to look back whenever you hear a car from behind and just get the fuck out of their way if their passing eachother. 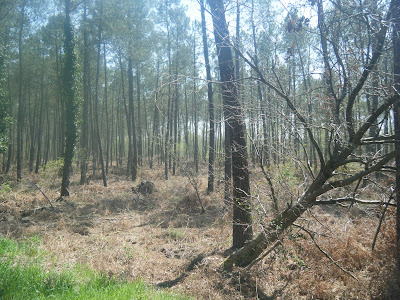 Out of the woods. Less dangerous. More hot. Running out of water. I'm sure there will be a bar or a gas station or maybe even a graveyard soon. One of Marie-France's last words to me was that I always could be sure to find water at graveyards.
I didn't think about it at the time, just smiled and thanked her for the advice. But why would one even need to know that??? I'm starting to learn. No graveyard though; so I drink this amazing bottle of Saint-Emilion 2007. It's a bit to hot... but really - a great wine; and if your thirsty enough even hot coca-cola will taste great. 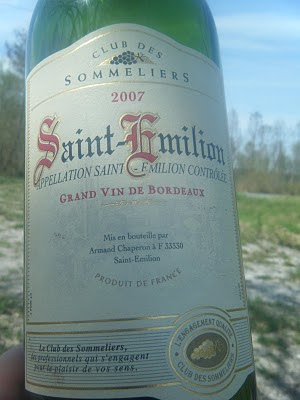 About 4-5 clicks from Ville du Barp I'm entering suburbia. A man of African decent is mowing his lawn; as I am passing he runs up to me and offers me some water. I have two glasses of ice cold bottled water with him, his and his whitetrash-looking wife and stepdaugther. It's almost always the downtrodden who will help you. My brain is pretty much cooked, I'm exhausted and a littlebit drunk (as mentioned I had to dig into my winesupply to stay hydrated and to get some weight off my back) and I've simply not realized yet how fast the camino is.
I should have asked him if I could put my tent up in his yard. I'm sure his hospitality would have included just about all my hearts desires. But I didn't. 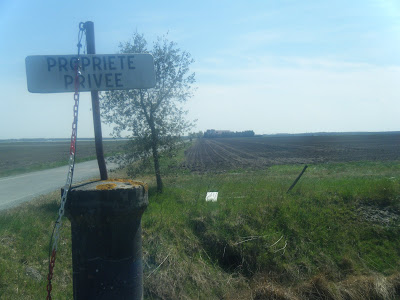 And if I had; I wouldn't have met this great man (more about him tomorrow). The refugio only had 4 beds and there were 7 pilgrims in Ville du Barp that night. I'd never put up my tent before and after struggling with it for a few minutes he (I'm sad to say I don't remember your name my friend) and Quebecan-guy helped me. Under normal conditions I'm confident my mensa-lvl IQ would have sorted the mystery out (its really quite simple it turns out) but really - at this point I was soooo mindfucked by my first caminoday my mind was reeling. 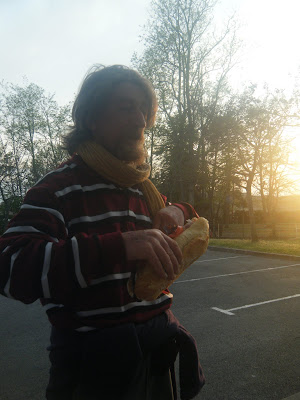 Quebecan-guy. He was really angry about something. I'm quite sure it wasn't me - just, youknow, society, the injustice of the world and such. He refused to speak English. I never met him again. I do hope he had a great camino and resolved some of those bitter angerissues of his.
And he did help me to put up the tent. I'm sure he really is a great guy. 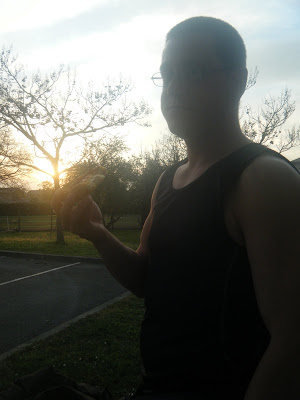 Once I get around to it I'll put up one of those great googlemaps stating that the whole of the Landes is a national park. They should be sued by every national park in the world; but I guess it's not a copyrighted term. Suffice to say: my mind was so destroyed by the day I took an evening stroll through town. When that backpacks off you hardly feel your blisters you know. 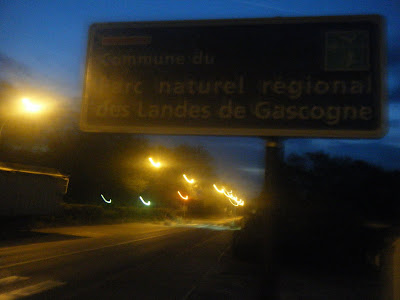