I awoke pretty early the next morning. I climbed out of my tent to relive myself; and as I was doing so I heard a terrible howl from somewhere inside the dark cold woods in front of me. I was like damn, that was fucking scary! And then, as I was shaking my normally huge but now minuscule thing, I heard that terrible howl again, this time to my left - it was a lot nearer than I'd thought at first and sad to say I sort of panicked.
I grabbed my cane and hid inside my tent. Flipping open my swiss armyknife I realized it was a utterly pathetic weapon and for some time I was just lying there in my tent in a fetal position grabbing my cane with one hand and the knife with the other. As my mind slowly woke up I started to realize that whatever hungry ghost or monster out there in the woods would be as hindered in it's pilgrimslaying by the sturdy walls of my tent as my fist would be hindered from dropping some nasty motherfucker by the armor of his t-shirt.
I gathered myself, climbed out again, and relocated to the watertower. I slammed the steel door shut and took a few minutes to gather myself. No more sounds. Damn you Paulo Cohelo and your pilgrimstory

about personal nemesis demon dogs following you on the camino!!! (Which I incidentally was reading at the time).
I finally got enough of a grip to put my tent down and pack my shit; and I started what would be my worst day on the whole of the camino. 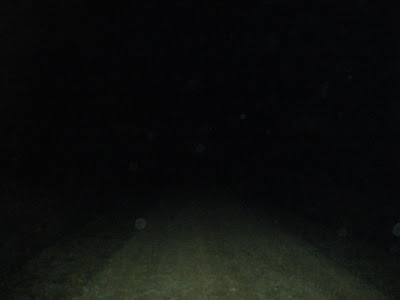 If you met me on the camino, or even after, you might have heard me mumble something offensive about the French style of camino-marking. This is not the worst. Not at all. There is, atleast, two very clear alternatives here. I could not possibly go wrong - one might be a 20K scenic route, the other a 3K short route; but atleast  I'd be sure to be on my way to Santiago whichever way I chose. None of the habitual am I going back to Paris-now-or-what-insecurities associated with the more normal French no-markings-at-all style. 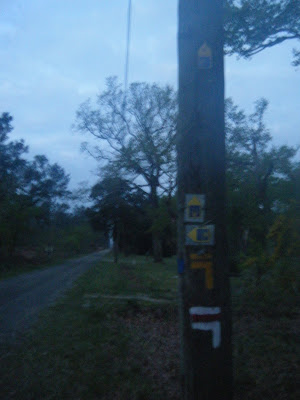 I guess I chose the scenic route. 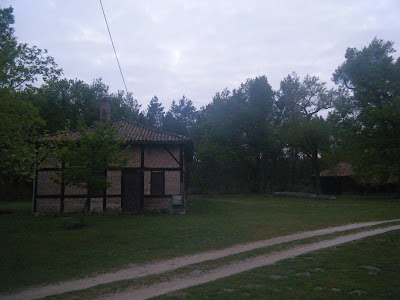 Yep, I'm pretty sure I did. 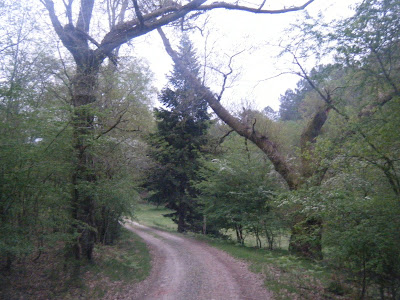 Onesse-Lahaire: The shop is closed. The nice lady on the picture informs me that the shop in Lesperon is closed as well. It's Monday, and you know... Mondays in France. I have a coffe. I have a beer. It's and "auberge" but they don't sell food. But when I explain them I have no food left the nice proprietors of the Auberge Caule in 40110 Onesse-Lahaire manages to dig up some dry bread and goose-liver-paté. It's expensive, but atleast it's food. I buy a couple of half-bottles of wine for the evening aswell. 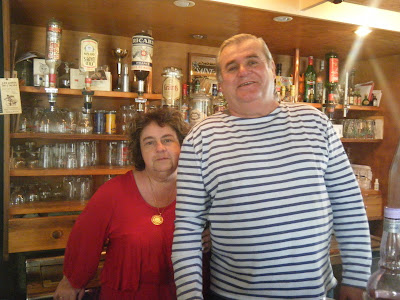 Dead trees. That always improves my mood. My feet hurts. 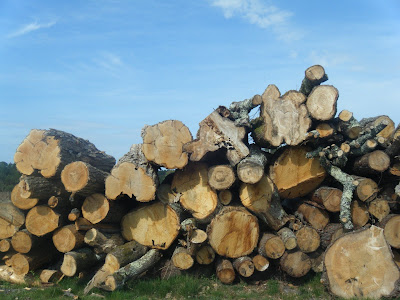 Happy sight! Civilian trees; not in rank and file. 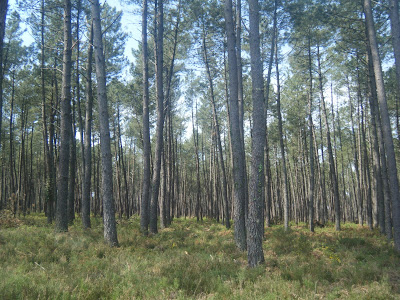 I took a wrong turn somewhere. I know I am on the right way, but I'm missing the industrially exploited trees. My feet hurts. I want to rest; but it's still a couple of hours walk till I find somewhere half-decent to rest. That day was incredibly hot. When I find somewhere a bit off the highway I put up my outer tent for the siesta.
I want to go home. I really really really don't want to be here. If I call a taxi I can be on some airport by evening. But then, the humiliation, the shame. Coming home after two weeks... So... Mats, how was your camino? You're a reeeaaally fast walker are you not?
I contemplate suicide. Seriously. I just want to die. But the tent is just to fucking hot. I pack up and walk on.
Shame is really underestimated as a motivational tool. 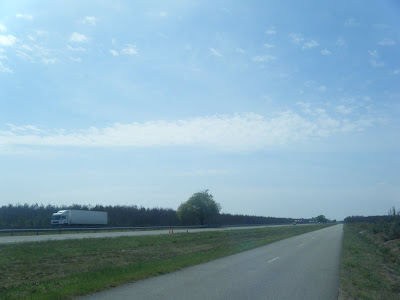 Haha. Funny. In Norwegian "fitte" means "pussy". Lesperon sounds a bit like "lesbian". My brain is getting retarded. It has regressed to the point where I have the humor of a 13 year old. Like any 13 year old I'm not even worried about that. I want a hotel! If it costs me a 100€'s I want a hotel. I have emergency money and this is an emergency. 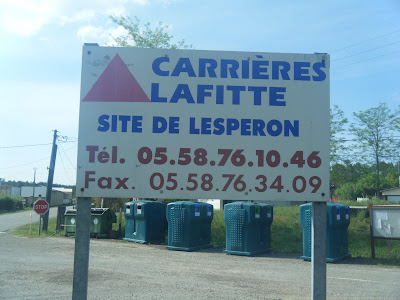 In Norway Vival is a generic Valium-brand. The store is open and I could probably have used some of Vival or Valium at this point. Its open for a few hours more - I decide to come back for food later and just get myself a cold beer. Heineken never tasted so good. The guy tells me there are no refugios in Lesperon. There is a hotel 3K's back on the highway. I trust my instincts (and sore feet) and disregard his misdirection and walk into town where I find an hotel. 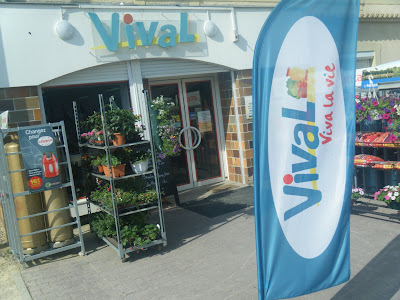 FUCK YOU nice lady!
The room is only 49€. When I ask if they have 'pilgrim prices' she informs me that there indeed is a refugio. Picture below of the secretary of the Mairie who shows me to the refugio, stamps my pilgrimpassport and tells me to just drop the key in the postbox outside the next morning. 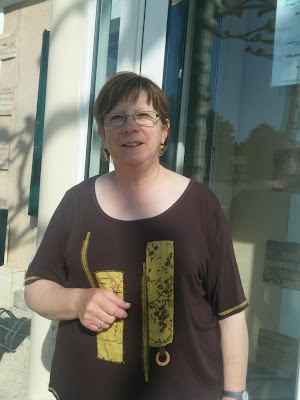 Handicap-shower!!! Pure bliss!!! Whoever thought of putting up a handicap-shower in a refugio is getting special mentions to Jack and gold stars in the Book of Doom. Never have I felt such gratitude. If you've never done it you simply can't know how much it hurts to put your messed up feet on the hard tile floor of a bathroom, getting those blisters all wet and soft...
Just putting my ass on that seat, letting that hot water soak me...Getting cleaned and relaxed and mhioww! 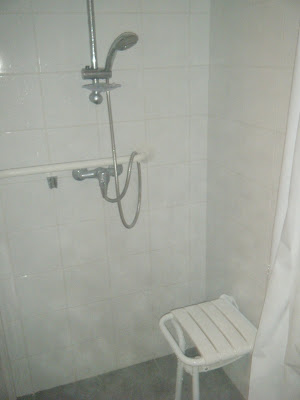 And then an entrecoté; a nice bottle of wine. A long talk on the phone with my wife. Yeah, yeah, I know I am a weakling; a pampered baby and all that... but sometimes you just need to treat yourself and in a hundred days of walking this was the only time. Jesus has forgiven greater transgressions. I'm convinced he would have forgiven me even if I'd just ended it all on that field a few hours earlier.

(Although I'm quite sure he would have shown me the handicap-shower, the steak, the bottle of wine and the nice talk with my love just to impress on me how stupid suicide really is.) 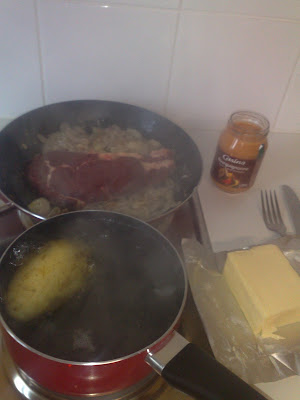 And then ofcourse some drunken ramblings in the guestbook. 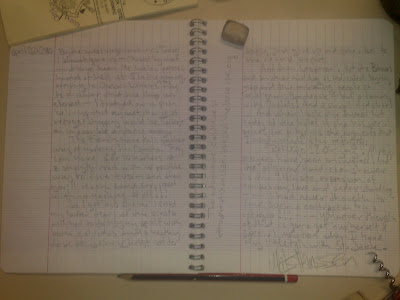