Really, if Norwegian Health Authorities visited France they would close the whole country immediately. Really, I don't mean to be ungrateful. I love to have a bed to sleep in, a microwave to heat my canned food in, and a toilet to do number twos in - and all for the price of 5€. I'll even sleep in my tent, squat in abandoned buildings and do hygienic stuff in rivers, oceans, brothels&sailor-bars. But maaan! 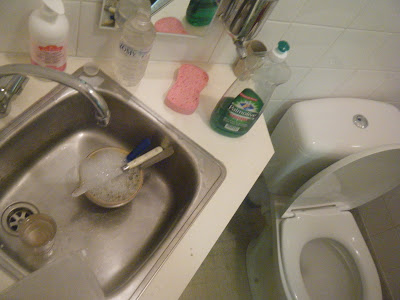 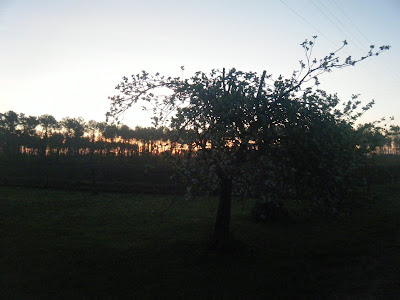 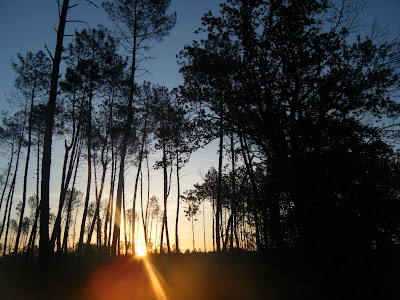 Another example of my inability to take pictures of the interesting things. A couple of kilometers down the road from the chickencoops you suddenly have to depart from the camino and traverse some difficult terrain and then walk along the edge of a large plowfield. Why? I couldn't tell you - but I imagine the pack of rabid dogs running loose on the farm 'cross the field would be it. How many pilgrims were eaten, how many times were the cops called, how many times did the Pilgrims Association call the farmer begging him to stop killing the holy men and women before they gave up and simply changed the camino?
For sure some French person will know. 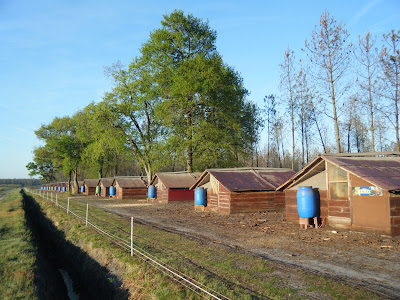 I imagine these chickenhouses get kind of hot during the day. Are they happy inside there? There seems to be plenty of room outside - but maybe they are Finnish chikens who only want to be in the sauna? 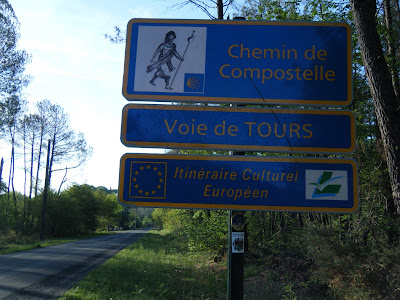 Remember that demon dog a couple of nights ago? I'm pretty sure this must have been the guy. My uncle, who's like some sort of dogwhisperer tells me that huskies really are about the nicest dogs you can come across.
In the fifties they had sort of a bad reputation. Killing people and cats and livestock. So unlike other dogs who've been bred mostly for looks, huskies have been bred for good demeanor and nice temper for 50 years. But then again... that damn dogwhisperer whom dogs don't have to know for 2 minutes before they lie at his feet instead of their owners have absolutely no clue as to how the reality of the thing is for the rest of us. Especially when we meet hungry, lonely and mad huskies at 4:30 in the morning somewhere in the woods with only a swiss armyknife and a cane to defend ourselves.
My dogwhispering uncle and that husky probably would have gone hunting French senior citizens or something together. But for sure that thing would have gone into some sort of bloodrage and eaten me hadn't he fed on some fat French pilgrims only days before. 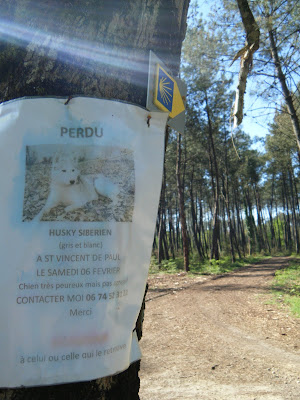 And behind this house was a little kennel with three mediumsized bitches in it. I was thinking maybe I should practice becoming friends with dogs - I mean, they where behind a two meter tall fence and all. But as I approached them the alphabitch started jumping like nothing I've ever seen and for a moment I though she was really going to make it over and I gave up trying to become her friend and just, you know, kept walking. 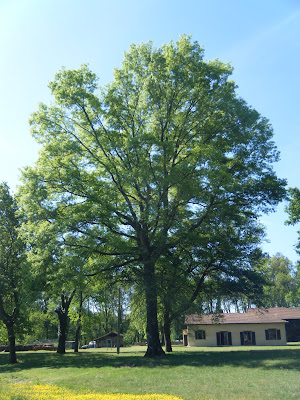 And as I was sitting in this most welcome rickety shack I saw a man taking his dogs for a walk in his car. You'd think he was lazy, but as I'm getting to know French dogs I'm sort of wondering if he just was afraid of them. 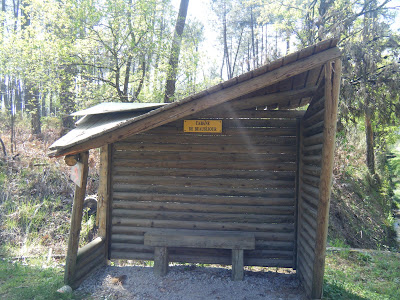 Ahh! Saint Paul les Dax! The entry to the city is a long stretch - probably even if you haven't walked all day in the blazing sun with blisters and all that without finding neither shops nor bars.
But then, finally, I found a shop with some plastic chairs, a table and a sun umbrella. Could it be any better? They even had cold beers in the fridge. One of the best bars in all of France I would say. Self service, no annoying radio or television playing in the corner. Really, it's a mystery to me that it wasn't a more popular bar.
After one beer I went back in and got one more, and I asked the guy who actually spoke a little English how far it was to the refugio. 50 meters! Maaaan! And then, what do you know, a Rastafarian enters the shop. A few minutes later he comes out with a 12pack of beers and I make contact... Sure he can help me. He disappears round the corner; I finish my beer in one big gulp, get my pack and run after him.
He's waiting. We walk down the street together. He helps me out - and I'll complete this part of the post once I find my notes. 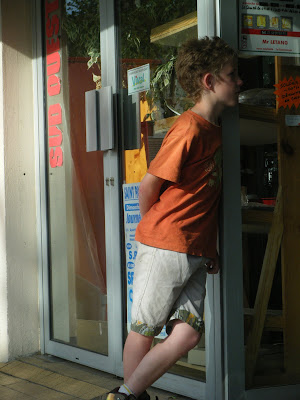 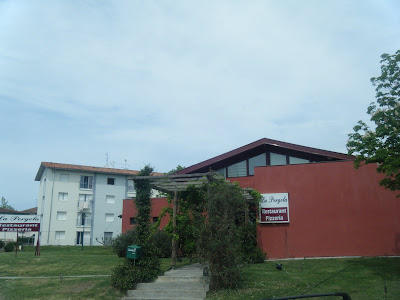 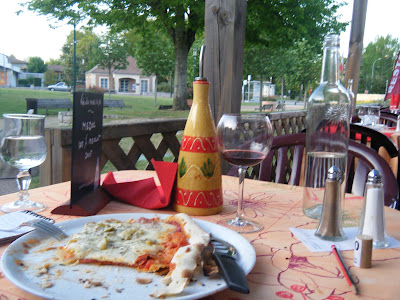 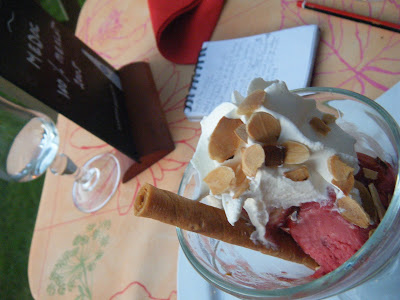 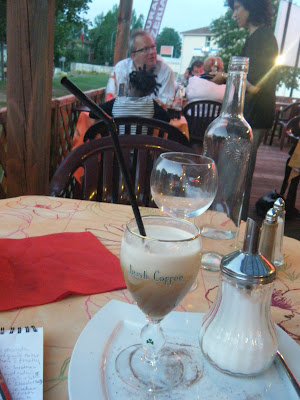 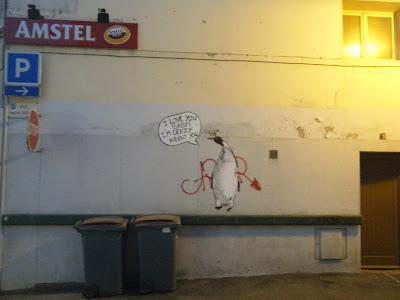 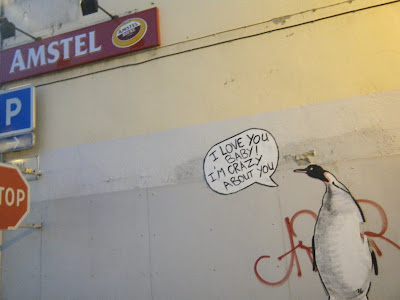 This guy was very cool, but kind of opinionated. Nevertheless we had a nice long chat. He told me he usually don't like guys like me - but since I was a pilgrim he'd decided to like me anyway. I gave him my email - but he never sent me that link he promised to send me. Typical, is it not? 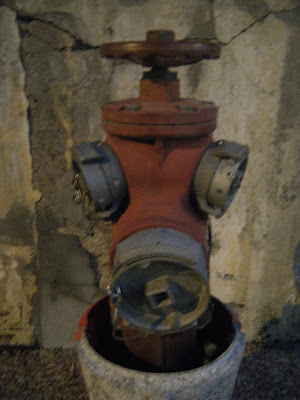 I dropped by the refugio before going to that restaurant; the door was locked and noone seemed to be there. I left my backpack in the toilet with my pilgrim-passport lying on top of it so everybody would understand that that backpack had legitimate business there and that any pilgrims residing at the refugio would understand there was another pilgrim around.
And at that resturant there was a pilgrim couple. No doubt - they had the clothes, the shells and even the pilgrim-walk. (That distinct walk some of us get, especially in the beginning, with stiff muscles, a hint of tendinitis and blisters. If anybody has a good video of the pilgrim-walk don't hesitate to email me @ mats [at] apeskalikkedrepeape.org) We acknowledged eachother; and I was happy to know I would have a bed to sleep in tonight.
Back at the refugio the door was locked. I knocked a couple of times on the door, then gave up. Maybe I should have spoken to them at the restaurant. Maybe I should have banged on that door. But I didn't. I just put up my tent, had a couple of drinks and a joint and went to bed.
They looked kind of shamefull when they walked past me next morning; having my breakfast outside the toilet. I just smiled and wished them bon chemin. I do think I am one of the good guys - but I'm not so good I don't hope that shame lingered like some hardly identifiable unease in their soul all the way to Santiago de Compostella. There, ofcourse, Jack would forgive them and tell them it's OK - he's one of my guys - just don't be such selfish assholes another time. 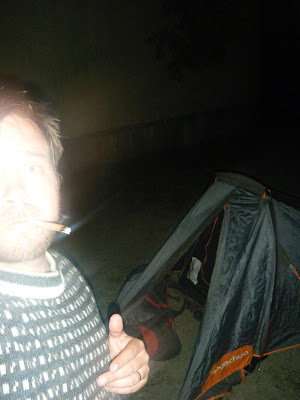