He was from Normandy; and I happily declared that we were cousins. He'd walked all the way from home with his donkey, and he had some terrible burns on his hands and nose - so terrible I wasn't really sure if it was sunburns or some strange skindecease. I had two bottles of 50+ and offered him one of them. But he declined. Ton-Ton ("uncle" who camino-rumors tells gave up somewhere round the Spanish border) wryly said "he's already a goner".

I was a bit hesitant to ask him if I could have his picture. Having walked already for a couple of months I was pretty sure he was sick of getting his picture taken. But no, no problem at all. 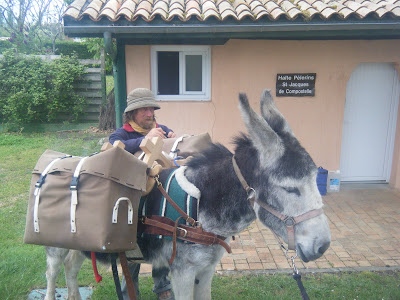 He wanted to learn the Norwegian word for donkey ("esel") - and he knew about 20 or 30 different words for the lovely animal. We didn't share much in the way of language - but pilgrims manage, they always do. When I indicated I'd heard donkeys are about the smartest animals around and much, much, much smarter than horses he readily agreed and seemed to conclude I was an OK sort of fellow. 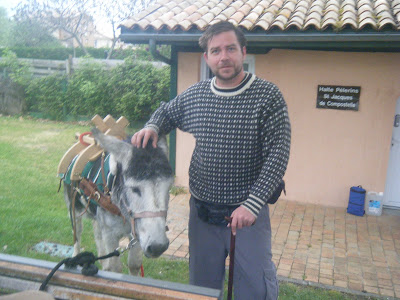 He was incredibly chatty and whenever I saw him he was always talking with someone. 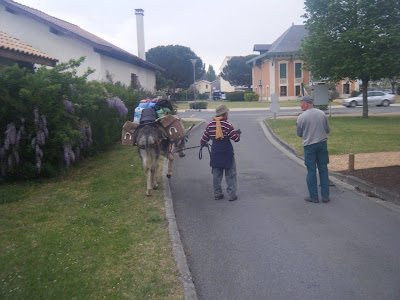 I made a slow start that day. I needed contactlenses; my old pair was wearing out, the rest of my lenses was sent back home by that Icelandic volcano. The only lenses I found in Bordeaux was expensive and of the wrong brand and for some reason I was sure I would find something better on the camino - proving I need neither be drunk nor stoned to make bad decisions.
I'd seen a optician in town; but she didn't open until 10 o'clock. No matter, yesterday had been a hard day. I got me some food, a pair of lightweight farmersandals and possibly a new bottle of wine. The optician does not sell contacts - but has a quite good selection of unfashionable spectacles.
Mackerel in tomato is a Norwegian breakfast classic. One of my favourites as a child and a sureshot to this day. But this one here proves we know nothing, absolutely nothing of the art of making canned mackerel in tomato - and the French' reputation as gourmands is in no way exaggerated. 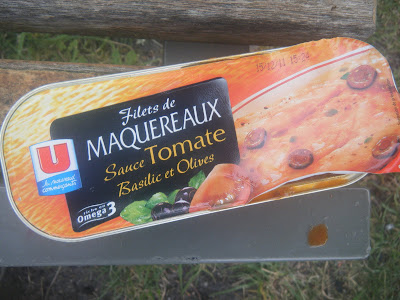 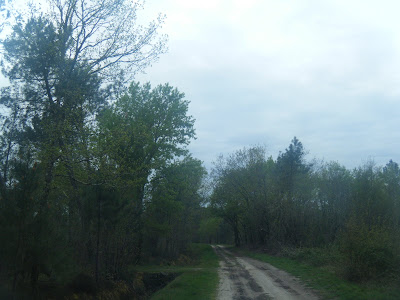 The typical French camino-arrow. They love to put this shit up at straight roads and to leave no indication of where you're supposed to go at crossroads. (Hey, man! There are roadsigns here - no need for yellow arrows. What do you mean nobody told you you were supposed to have guidebooks, maps, working knowledge of French and a GPS? Stoopid Norwegian.)
Note how the arrow is really bendy and ambiguous like a sarcastic doublejointed chinese trapese artist. 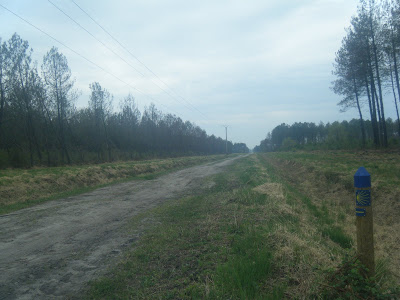 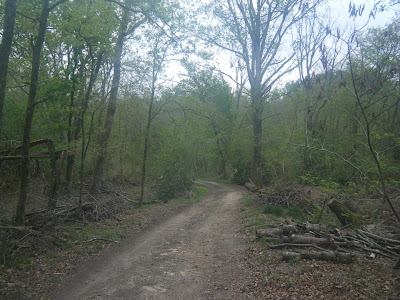 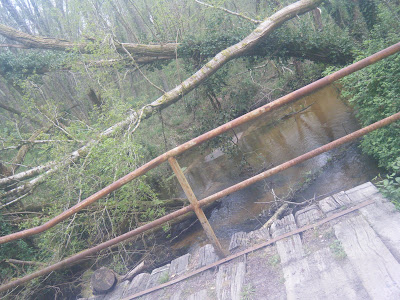 For some reason I was under the impression that deVille was some sorth of fireplace-brand. A internetsearch gives me only cars, porn and watches. Doesn't matter. I found it a funny word, a funny brand. De Ville with my very very bad French translates to something like 'the village' - but at the same time it's quite close to devil.
Is the village the devil? Uhm, I really need to talk to someone soon. Almost two weeks without proper comunication is starting to take it's toll. I don't need to speak Norwegian - someone with a vocabulary of more than 500 English words and a personality even remotly close to someone I could be friends with in the "real" world would be quite pleasant. 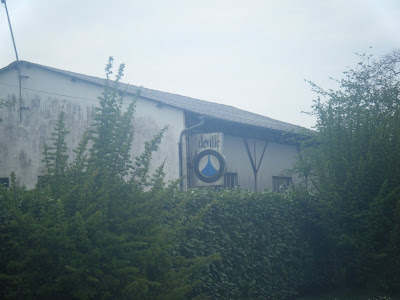 A nice example of the typical arcitechture of the area. 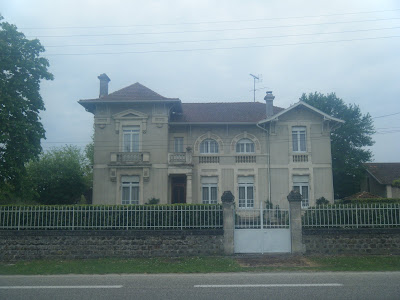 I couldn't find the refugio rumored to be in Belin-Beliet so I slept somewhere in the woods that night. Had I only had the precense of mind to take a picture of my camp. Ja, ja like my people say.
Posted by MatsHanssen at 22.4.10