While days can be pretty hot for a northerner; nights - it turns out - can be quite cold. I awoke that night freezing and with pain in my back, being unused to sleeping on the ground. A hundred sit-ups later I wasn't freezing anymore - but very very awake. A bottle of wine and many many words in my notebook later I got a few hours sleep extra. 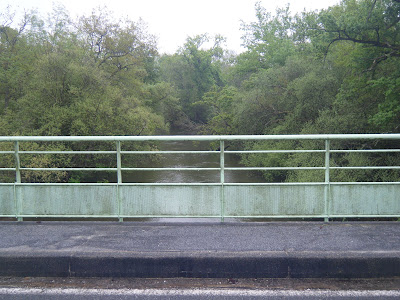 Belin-Beliet turns out to be quite big. The printout from Gradingnan indicating there would be a refugio there didn't mention that it (Belin-Beliet) actually was a commune and not, as I assumed, the village I'd found the last night.
An hours walk, perhaps a bit less, perhaps a bit more, from my campsite I find part two of the city. No refugio here either - not that I would have taken in this early in the morning. I locate the Tourist Information - the only one I'll find before Dax; but it's only open like a couple of months a year and definitely not in the end of April. I have more luck with the local café - new owners serve me with the enthusiasm typical of new owners and I get both an excellent cup of café latte and the opportunity to take my morning dump in a real toilet. 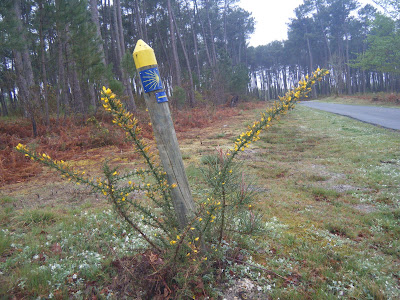 It's one o'clock by the time I reach this nice little church. It starts raining while I'm having my lunch; and when I start walking I realise that the poncho I took from the lost&found in Gradingnan on the insistence of Lilian is made for dwarfs or something (no, no, you don't have to buy a poncho - we have one at the refugio! :) Oh, well.
I'm pretty sure there was supposed to be a refugio somewhere here; I hadn't really planned to walk much further. There is a privatelooking home with a sign saying "Gite" just across the road. I do wonder for a second what exactly a "Gite" is; perhaps its French for pension or somesuch - but I'm sure somebody would have mentioned that Gites are some sort of Refugio in my week in Bordeaux if it was possible to sleep and rest in them. 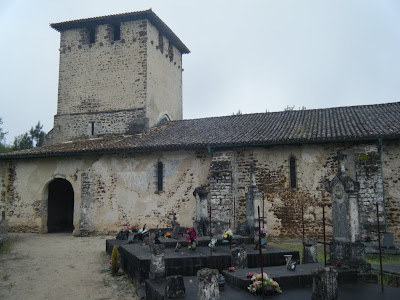 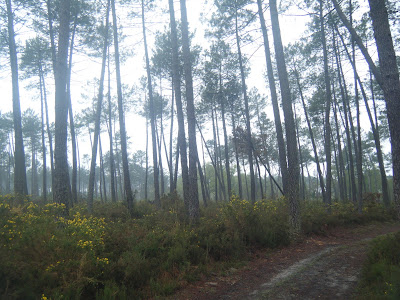 It turns out to be a very long day indeed - these French "towns" and "villages" are really quite huge. About half  an hour/hour before the place I'd planned to stop the next day I took 15 minutes in a ditch. I was completely finished. My feet were incredibly painfull, I had no energy left, and I was seriously regretting not taking in to that 47€ 4 star hotel next to the campingplace that was closed that I had hoped to sleep that night. A nice lady stopped her car and asked if I needed help. Somewhere to sleep, perhaps? But sent her on her way with my thanks and my blessings. I'm one stubborn motherfucker and I kept my vows. All of them.

A bit outside Saugnac I found my 12,5euro place to sleep. It was called Atelier - Gite Saugnac. Didn't look much like a private home at all, rather it looked a bit like a summer camp/summerschool. And while I'm still - to this day - not sure that "Gite" means somewhere papa can put his head down and call home - I was starting to suspect that a Gite is somewhere you indeed can sleep. (Translate.Google.com claims it means "cottage").

Really not that bad. Private rooms; bath shared with one other (unoccupied) room. No shops or bars around so I buy both dinner and breakfast. Generous servings and healthy food. The guy, who don't speak English at all, like all French, do see how much I'm suffering and gets me an extra bread, a map for tomorrow and a Guidebook published by the Landes Friends of the Camino! (In French, but still.)
Posted by MatsHanssen at 23.4.10