Having walked the camino back in 2008 I knew that everything would change once I reached Saint Jean Pied-de-Port, and even the most rainy day yet couldn't really somber my mood. Not to much anyway. 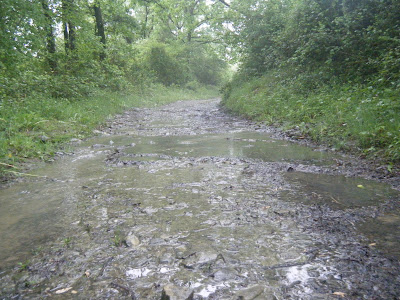 In Spain there would be well marked roads. Pilgrims. English-speaking pilgrims. Shops, bars and infrastructure. Really; I am a big fan of infrastructure. Whenever I talk to people dreaming of doing the South-East Asia-thing I tell them to go to Thailand first. Good place to acclimatize; to get used to the culture et cetera. Why? Because of the infrastructure. Good roads, traffick slightly less insane than other countries in the region, 7-11's, ATM's, some of the best doctors and hospitals in the world. 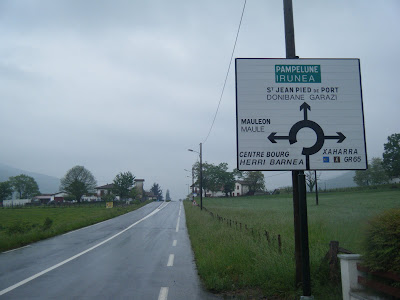 Now that's infrastructure. You don't know how welcome a little shed along the road is before you've walked a few hours in pouring rain. You should make your pilgrimage as long as you can - it takes time to start appreciating the little things. But once you do, everything has already changed. 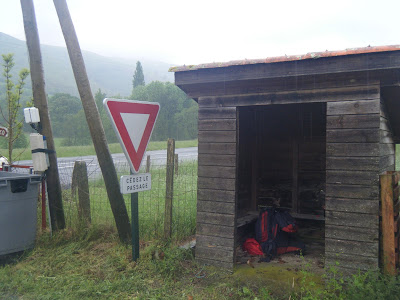 I've never been able to make up my mind about these little trolleys some people use instead of backpacks. On one level they must be very practical on good and flat/downhill roads - but considering that you have to drag them along in rugged and at times intensely uphill terrain: you cannot really drag that much more than you can carry in a backpack. Also, if you've followed me all the way from Bordeaux I'm sure you've seen pictures of terrain where a trolley would be hard pressed to pass.
And they are, indeed, as you can see, prone to mechanical failure. I'm sure some pilgrim had some very upsetting moments right here. (I'm sure he/she is feeling better by now). So, I wouldn't advice it unless you have backproblems. That pack might seem heavy at first - but you adopt, you get stronger and if you (like most beginners) pack to much you can simply throw some of it off or just send it home by mail. 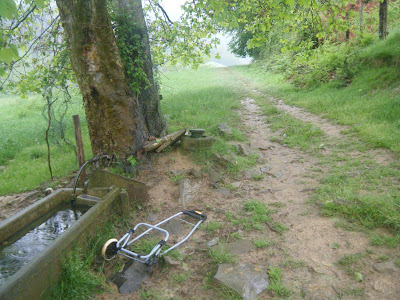 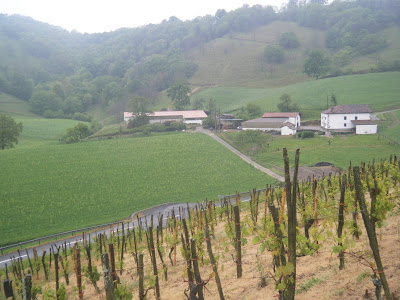 While French designers can fuck up simplistic tasks like designing an arrow - it's still hard not to enjoy French design. This roadsign does, though, raise some questions. Don't hesitate to give your analysis (or even your narrative) in the commentsfield. 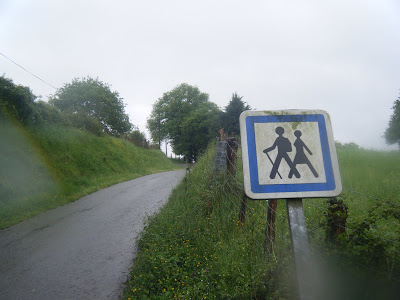 Now that's design. Just put some sticks in the ground. It means: This road is closed/private/do not go to Santiago. 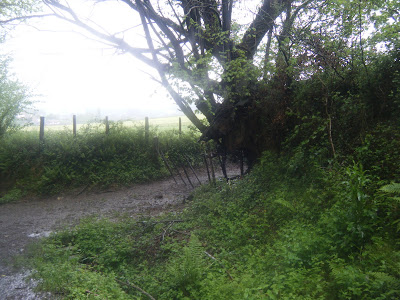 Ohhh!! Angry now! My 2-300€ Missinglink hardcore mountaineering-jacket can't stand the rain! Whatthefuck! Now, in southern France that's annoying. In Norwegian mountains that's dangerous. Really, really, really dangerous.
I will write some posts on equipment later on - I just really need to write my way home while memories are reasonably fresh. I'd love to get some sponsors for my next adventure - but I guess I'm not going to get any. Missinglink, Trangoworld, Mammut, Kuxkul, McKinley, Fuji are all gonna get trashed. And who wants to sponsor someone who trashes "quality" equipment and then proceeds to trash the producers on his well-renowned and widely read blog? 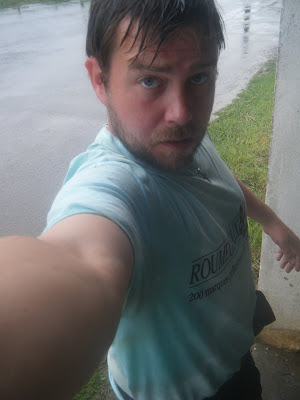 No, that's not sweat. It was a chill day.
Well; nothing like bus-shed for your lunch. If you study the picture you can see that I am still eating cake. Ohh. Pilgrim life - sometimes I miss it. 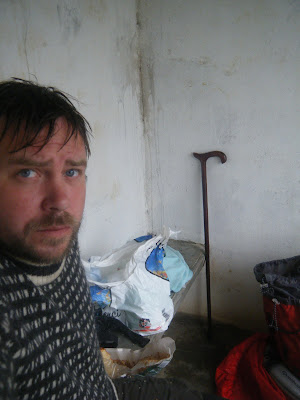 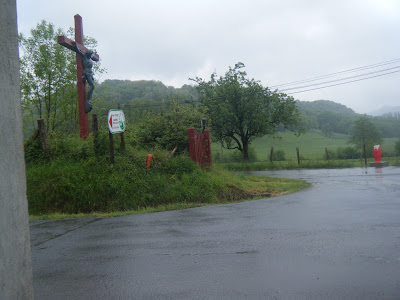 The view from my lunch-shed. 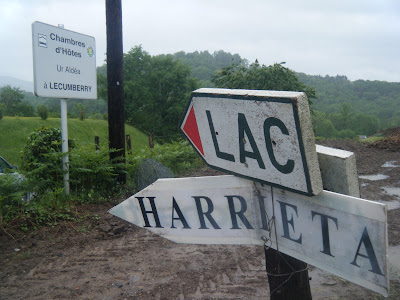 Somewhere on the camino some hours walk north of St.Jean Pied-de-Port is a church dedicated to Mary Magdalene - said to be the closest disciple to Jesus of Nazareth. Take the time someday to study the Gospel of Mary Magdalene

- it is quite different from the gospels authorized by the church of Peter. 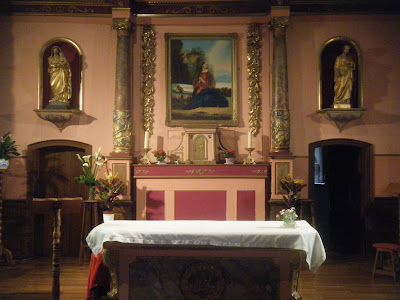 This picture of the picture of Michel Garicoits is taken inside the Church of Mary Magdalene. Im sure that if I bothered to google it I'd find that this is just another example of confusing French design.
I prefer the mystery. Who is this man? How did he become 200 years old. Why is his portrait in a church dedicated to Mary Magdalene? 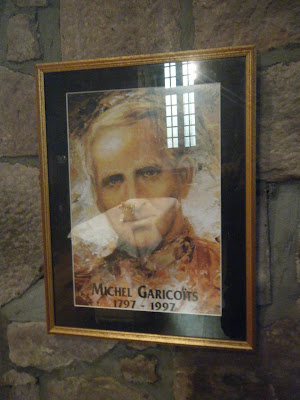 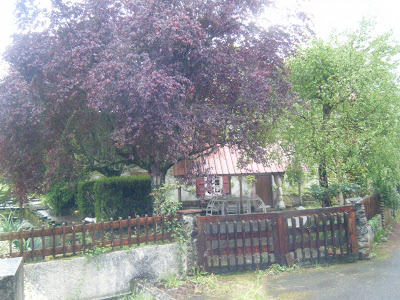 Walking into the Basque country I'd expected to see a lot of these ETA-tags - but this is the only one I saw. I guess they're not to popular with the kids. 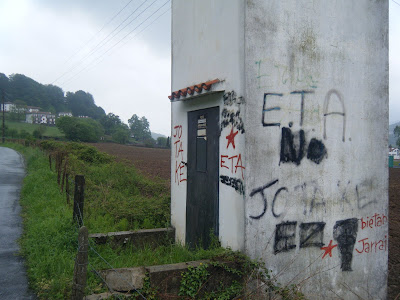 St. Jean Pied-de-Port is on the other side of that hill. I wanted to savour the moment and walked up to the castle before walking through that gate. 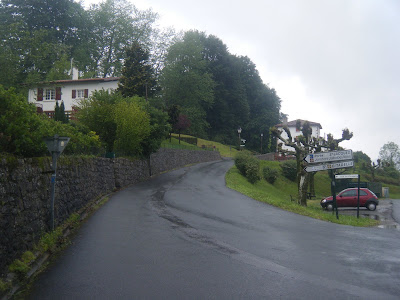 And through the pilgrims gate. I just might have felt more joy walking in to Santiago - but walking through the pilgrims gate of St. Jean Pied-de-Port after two weeks of hell in what was rumored to take about 7 days was an enormous personal victory.
Really, there were times I thought I would not be able to make it. It's kind of funny; meeting other pilgrims I felt like such a veteran. But two weeks later they too would have walked as long and far as me - and still there would be new arrivals for another two weeks.
There are many who insists we are all the same, we are all pilgrims.  I&I; we are all the same, all part of the Allsoul, all gems in the eye of the Allfather  Maybe especially the more experienced pilgrims, and the most politically correct mostest authentic individuals of western civilization in the age of post-modern authenticity.
Yes; we have the same basic rights. We are all pilgrims thrust into a life we most likly never asked for. We are all children of the Universe (or whatever you choose to call God). It is all Love: But we are not the same. I am not you -whether you be more hardcore than I or you be softer - and you are not I.  Neither on the camino, nor in real life. I will write and have written more on this. But elsewhere. 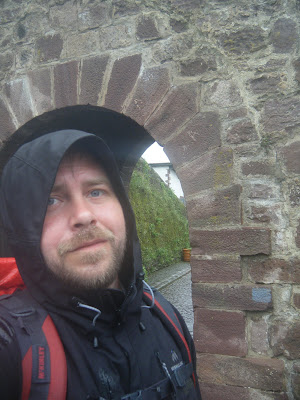 In the foreground are two French-Canadians. The upper-middle-class girl is presumably rebelling and travelling with her construction prettyboy boyfriend. The guy is... I don't remember. But Quebecan aswell and quite the amateur artist. He even made a aquarell of me outside the pilgrims gate. I'll be sure to post it once I get 'round to it. 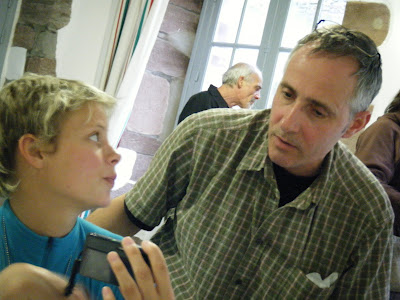 And Patrick - he took my advice and spent atleast this one night in a public refugio. For some reason, even though this was the last night I saw him, even though he really didn't make that much of an impression: he kept coming to mind when I was praying for the many people I'd met on my camino. Mayhap he was praying for me? 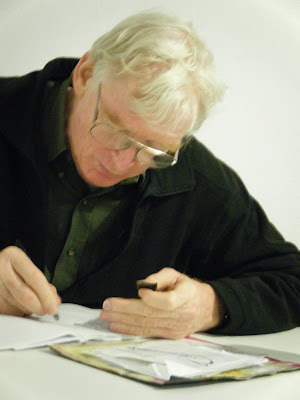 The hospitalera. Basque, proud, rash, a bit rude (allthough "direct" is a much better word). In many a way she reminds me of my own people; the Northern people. Not bound by convention, strong and free. Quick to anger, even quicker to laughter.
Easy to ridicule for 'well mannered' and 'cultured' individuals. 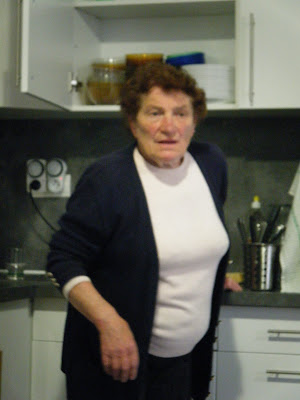 Ofcourse those of the Northern or Basque people who hasn't had their pride and heritage brainwashed out of them by the constant mediastorms surrounding us all; will tell you that "Southerners" and "French people" know nothing of culture or manners.
In their minds, it seems; the verbal culture of my people is something to ridicule. "Oh, northerners, they swear a lot." The southern culture - theater and art and literature all drawn out of the ass of the continent - now that's culture and if you find it pathetic you are no more than just another hillbilly.
The greatest artist I ever met were northern storytellers seemingly only chatting over a cup of coffee by the kitchen window. It takes a whole life to perfect that art, and it took me about 20 years to realise that the pretentious "artists" of refined culture have nothing on a geriatric chatty northerner with a cup of coffee as his only prop. 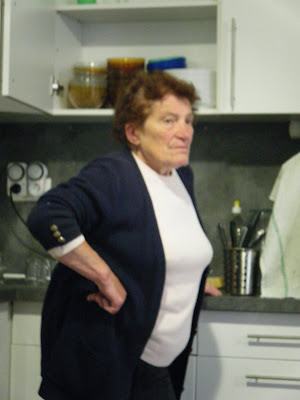 She reminds me of my mother and my grandmother. I love women like this. On my pilgrimage I am trying to decide whether to stay married, have children and become a priest: or to become a vagabond. Waybound. Walking Gods good earth; serving those I meet; delivering a message of hope and gratitude because His creation is good and if you ever doubt it take a walk through a trenchtown, a ghetto, barrio, a slum and look at all the happy faces and happy moments. (But do try not to look like a tourist; take your jewelery off, leave your creditcards and valuables at home and keep your eyes down brother...)
Looking at this woman I want to stay at home. I want to be a breeder. I want to be the salt of the earth. Because this is what my wife will become - only in a northern fashion. 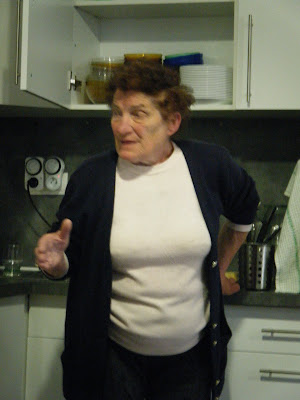 The French-Canadian couple is only planning to travel about half-way. Then Ibiza. A compromise between academic and working-class culture. I'd say I hope it works out for them; but I sort of don't. He is a very cool guy - but once he is through liberating her from convention he will only be holding her back.
To the far right is an Italian gentleman I sadly don't remember the name of - but walking the same pace we became quite the friends even though we shared almost no language. 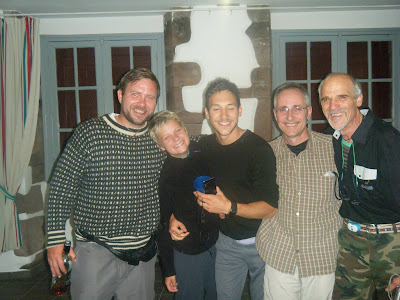 On the castle sharing some of the holy ganja. I preached a bit to them about the spiritual use of ganja and they seemed to take it to heart. 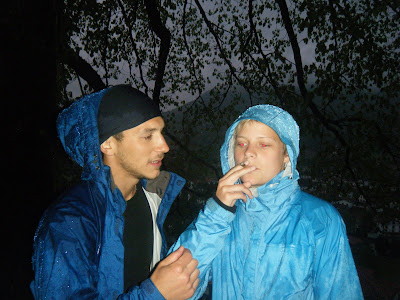 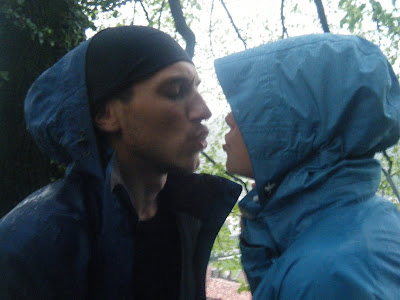 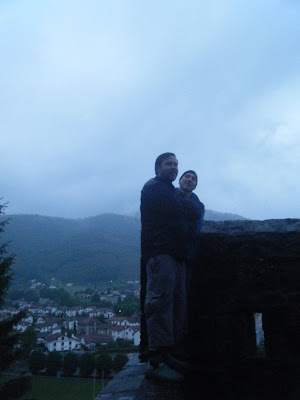