The hospitaleros at Saint Palais. I think they'd started walking in Le Puy, but when they were offered the position as hospitaleros in Saint Palais they took it to get a little break. Truly great people. I mentioned my frustration about not being able to dry my clothes - well it were not these guys fault. They filled the kitchen with heaters and we were all drying our clothes - but when the official came to inspect we all had to hide our stuff in a hurry cause apparently he would go flippio if he saw they were doing us this little service. 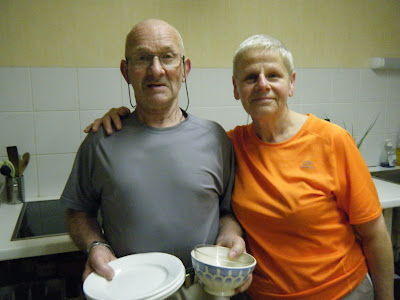 I also met my first playgrim in Saint Palais. The picture is unrelated, it's just some more honoured dead French sons. The playgrim hailed from the Estados Unidos - his cute little peregrina was Swiss.
What, exactly, is a playgrim you might ask? Well, the Camino Santiago is also known as the Camino of Love. Just consider it: You walk all day in beautiful nature. In the morning you stop in a bar once or twice for coffee; at lunch you'll have a picnic at some wünderschön scenic spot, then maybe you'll have a glass of wine or another cup of coffee, for the road so to speak, in some other little cozy bar. And then you'll come to some refugio, and there you'll make a nice little dinner, or perhaps you'll go out to a nice restaurant.
Now, if you do all that with some person of the opposite sex (there are no gay people on the camino - but we all hope to see the rainbow people there as soon as possible): this all translates to the perfect date. And while there most certainly are many people who find true love on the camino --- there are those who pray on cute little peregrinas whom are striken by the mood and the openess and perhaps are a little oblivious to the fact that also playas might walk the same road as themselves.
Now, such a playa, such a cock of prey is what we call a Playgrim. 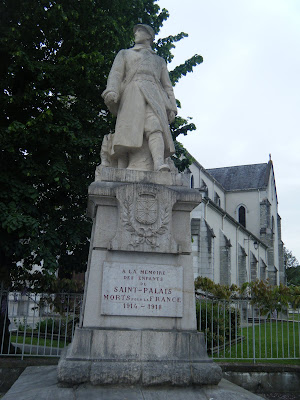 He'd walked the camino a few times before. Was only walking a part of it this time. When I told him I intended to walk all the way to Finisterre he told me I just had to visit Muxia. At first I just thought he was showing of for his girlfriend - but later other people told me the same. So, I don't know anymore.
I guess one thing doesn't exclude the other. 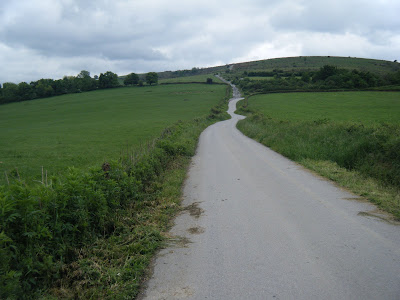 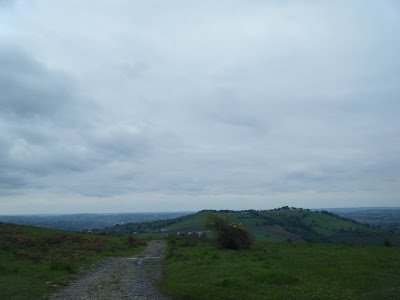 Wow! Is that the Pyrinees in the background?? Yes, yes I think it is! 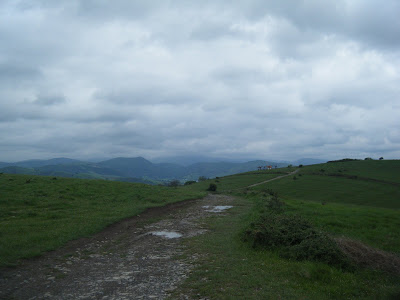 That little white building down yonder is a chapel. I experienced my first little camino miracle there. I will tell you more of that later - once I start filling inn all my notes. 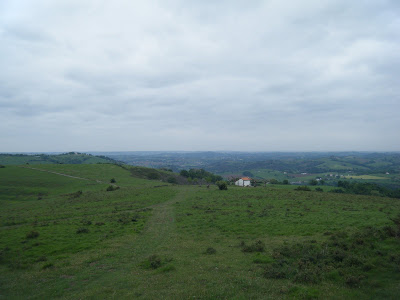 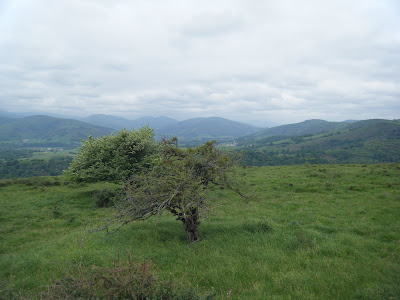 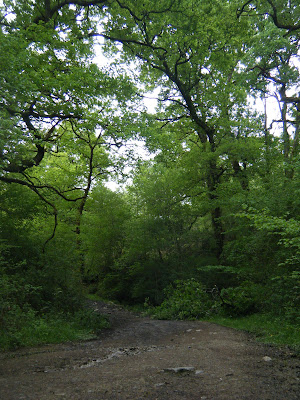 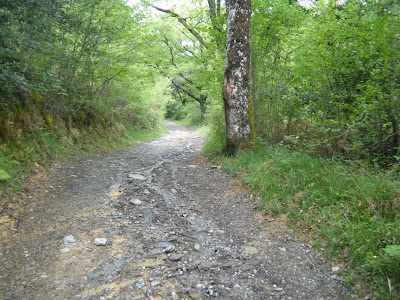 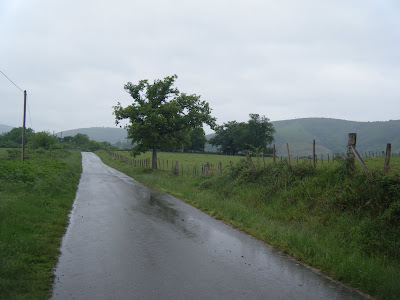 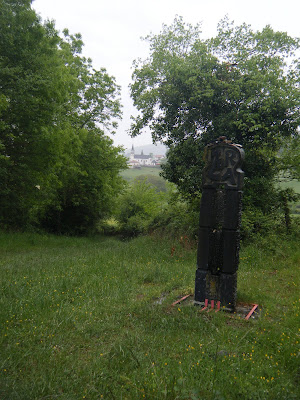 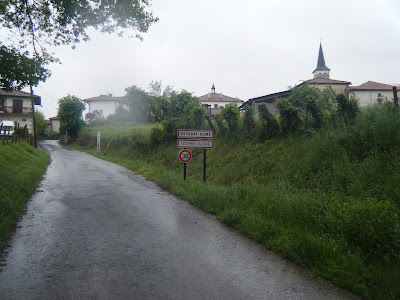 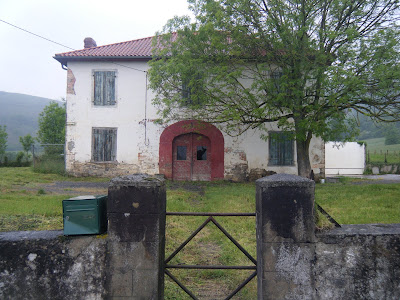 Inside the private refugio. I don't know whether to love or hate their pilgirmshell-toiletpaperholder. All French roads going to St.Jean Pied-de-Port are now entwined; thus all other refugios were full. I shared rooms with an elderly academic expert on Islam named Patrick. From the US with his roots in Catholic Ireland we had some interesting discussions on Islam.
The great apostle James, Jaques, Jacob, Jack, Tiago is best known in Spain as San Tiago Matamoro (Saint James Moorsbane) [moors is an ancient word for arabs/moslems]. I tried, several different ways, to get his thoughts on the revival on the road of Jack Matamoro in these troubled times. But even though he was so deeply invested in the issue he had to break his camino to speak in a conference in Israel he had nothing good to come with other than that my observations where good, acute, interesting and so on.
Truth be told he seemed a bit paranoid about the whole thing. It's strange to me that a man who has invested his whole career in the issue has nothing to say on it. But then, he probably was just out to save his soul in the holy year and not here to discuss politics. But man! I wasn't out for a discussion - I just wanted the views of a learned man on the issues at hand.
He was very sceptical of the municipal refugios and the dormitories. And, I think, in the end I did him more favours than he did me by convincing him to try them out. It is in the municipals and parroquials you find the authentic pilgrims and the interesting people. The private refugios seldom offer interesting conversation. 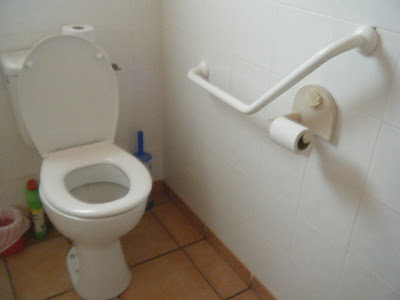 Still no shops; meaning no food. And while I love my little cake; dinner was mandatory here. 23€ for a shared room, dinner and breakfast is really not that bad - even in Spain. But mandatory dinner, even as great as it was is sort of taking advantage.
The couple to my right at dinner. He was a farmer, she was a teacher. She was loving it, he was just dragged along. The camino can be extreme to couples. Either it binds them so close they will never part - or it rips them apart as relentlessly and slowly as you rip that compeed-band aid off a blister that started filling with water again.
To early to say with these guys though. 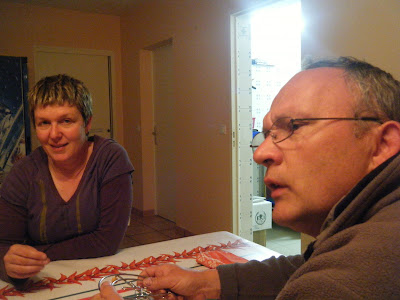 We're at Lucie and Bernards private refugio - and that's Lucie in the background. She's a wonderful cook, a nice, organized and professional hospitalera. I would meet the couple in the foreground many times along the camino, but in the end they had to give up. Nice people. She spoke good English, he almost none. I think they walked to hard. When I left the next morning they stayed another day because of the rain - and if that really was their habit they would have to walk pretty hard to keep up with me enough for us to meet again and time again. And when they in the end gave up it was because of that camino demon tendinitis. 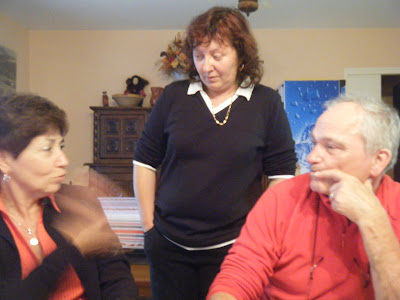 And this is Bernard. I remember praying to meet 'true basques' that day. I don't know if my prayer was answered - but were Lucie where organized and professional; Bernard was the perfect host. Serving drinks, toasting, telling stories I wish I had the language-skills to understand and singing old camino songs to entertain us.
But there was something of the clown about him; some broken pride. Never will I sing the songs of our people for southern tourists looking for authenticity. And I do think Bernard would have been happier making bombs for the ETA than singing for the fine frenchies in the room.
But then again. I'd rather be a broken clown than a killer of innocents. But maaan! Look at those strong hands; he wasn't made to be the entertainment of his peoples conquerors. 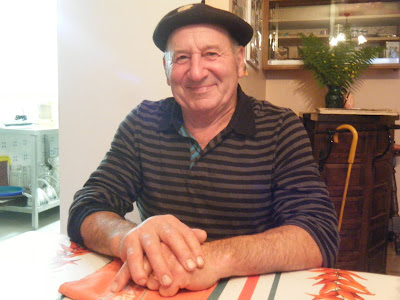