Sitting at the same spot as the previous morning, having my morning cigarette I met Julie of Quebec. Her english was comsi-comsa (or however one would spell the french expression meaning something like so-so) - but we were soon having a nice little conversation.

The Route Napoleon was still closed, and I'd been trying to decide whether to give up and go, or wait another day. Julie convinced me to stay. Not the hardest of tasks admittedly. We chatted for a while, decided to go looking for a refugio, and after checking a few (amongst others the camping) we decided on the Accueil Paroissial Kaserna - the Parish Refugio. 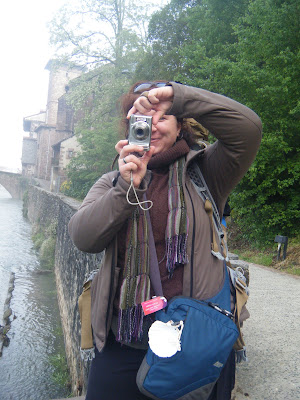 And then we did some shopping. I'd lost my Swiss army-knife, My Bål-pants had proven themselves to be rather useless when it gets (very) wet, I needed new socks, new shoes and provisions. Julie needed a poncho and a walking stick - a pilgrims staff. 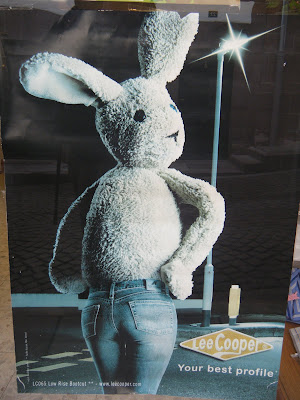 It was a beautiful day, so after finishing our shopping (I got everything but socks and shoes) we went for a slow lunch by the river. We shared some wine and did the ingenious little lunch-gimmick of each making every-other sandwich (small loafs of french bread makes for slow eating of appetizersized sandwiches).
Julie turned out to be a fallen angel. Almost literally. A few years ago she'd done her first parachute jump. The chute didn't open, but she hit some tall trees and miraculously survived. Now she'd just finished nurse-school and was going to walk the camino to find out what she wanted to do with her life and to maybe find some healing from the trauma of surviving what should not have been survived.
She wanted to go to Africa or take an extra year to get a specialization. The last time I met her was in Pamplona where she took an extra day. She was a strong willed walker, but her weight and lack of training made her suffer from blisters and whatnot. I hope she finished. I hope she decided to go to Africa. 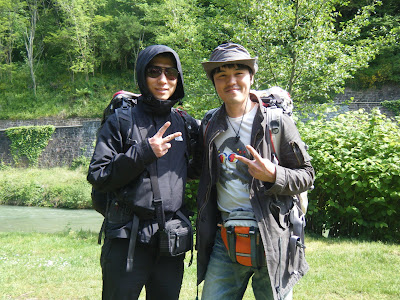 The Ninja and the Cowboy.
And then came along the first 'proffesional' pilgrim of my camino. Was he a man of God or adventurous free soul who'd found a niche? It's hard to say - a littlebit of bout - but there is no doubt, atleast, that he was not a pious man. A traveling monk; and not a prophet is my conclusion after spending a few hours with him.
Julie seemed a bit distressed by him and his younger friend, and soon she left. (But first we helped her repack her way to heavy bags...) She reassured me time and time again that she completely understood my desire to get to know these fellows. And then she left. I wonder how she felt though. Uncomfortable with the drinking and the smoking? Uncomfortable with the free spirited brotherhood? Uncomfortable, perhaps, with her own discomfort? 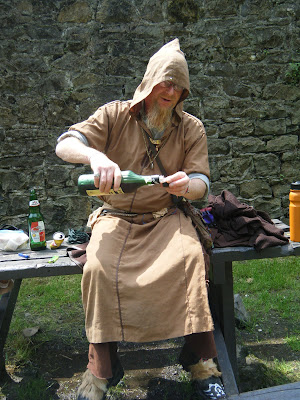 We got drunk and stoned together. He told me he'd been walking for 17 years and that he was on his way to India. He told me he was ex-military, but upon closer scrutiny it turned out he had been a military clerk and not the fieldgrunt he seemed to want me to believe that he was. 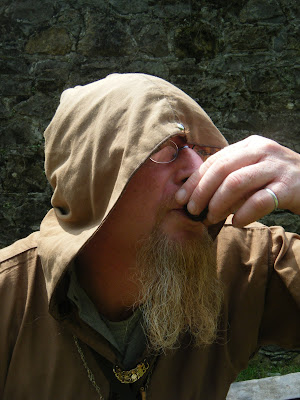 I don't know what he was searching for. We spoke a bit of things spiritual; and when I sensed that his mind was indeed open I did preach a bit for him. In return he spoke to me on matters of the road. Of God he did not speak. 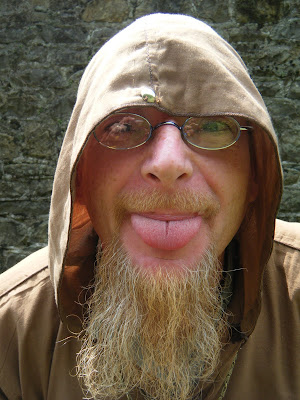 And here is his young friend. Getting to know the next generation (this young man is almost 15 years younger than me - he could have been my son) has been one of the great privileges of my camino. There is great hope.
But every single one of them seem too touched by the amount of information available. The conspiracies and dark truths of this world are known to them - and just like happened to me when that veil was ripped from my eyes - they either battle windmills thinking they be dragons... or they let themselves succumb to hedonism and indifference.
But he was young, his mind was open and when I spoke to him of choosing battles he did understand and his mind seemed to move with great leaps across traps and obstacles I myself used years to overcome by my lonesome. 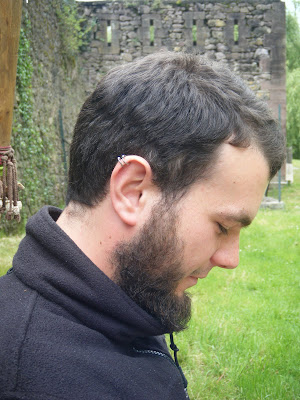 I asked him why he had a moslem beard and he explained that he used it to look older and more dangerous walking through the big cities. I've done the same myself on many an occasion - but I did recommend him to grow a mustache. Not only would he look better, but he wouldn't get in trouble for looking like a muselman.
Posted by MatsHanssen at 7.5.10