My first night in a parish refugio was an eyeopener - the communal dinner with prayer, speeches, 3 courses and wine was something I had no idea I'd missed until I found it.
Eva, on the picture below, would become a great friend. She was so proud of her 5 kg backpack - and I guess with good reason. It can be done - cause she had everything she needed except a hairdryer. Later she would get one. 150g; usable for drying both hair and wet clothes and shoes. 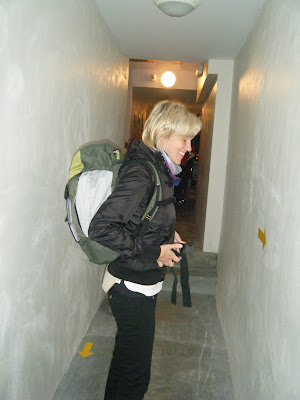 I guess she took a liking to me when she realized I was a smoker. After dinner I went out to have a evening 'sigarette', and when I came back everybody was about to go to bed. I brushed my teeth and went to bed. As I passed Evas bed (we were all sleeping in bunkbeds in the same room as is normal in refugios) she said with a note of surprise in her voice you smoke? I answered the only possible and truthful answer in a room full of 50 year+ pilgrims I don't smoke... cigarettes. 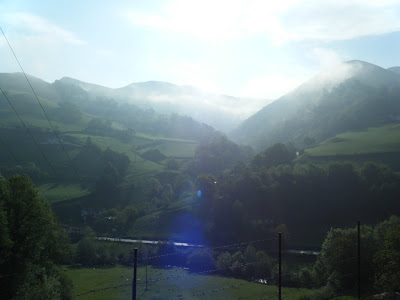 32 years of age she'd grown up in Transylvania, and she did seem to have some of that rumored Transylvanian magic. Menfolk flocked to her like bees to honey and it was a fascinating spectacle to watch - seeing the Transylvanian princess surrounded by up to 5 guys ready to do her bidding on the camino I felt almost disgusted with my gender.
Until our trails parted in Burgos the only true friends she seemed to get was me and the French guy who's name I've sadly forgotten. Both us weresomehow more or less immune to her allure. 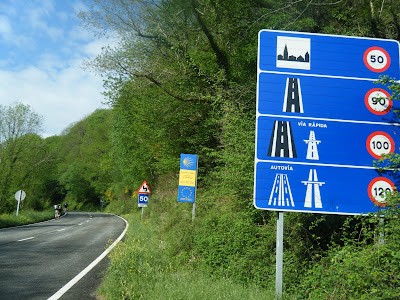 Crossing the border to Spain.
She had father-issues. He had been a very strict father. Way ahead of his time; doing ecological farming as a hobby in the 70's and 80's. Refusing to have a television. Filling their home with books, music and culture. And when the hard times came; he'd filled their home with refugees until they gave up and moved to Budapest  around the time of the fall of the wall.
Like willful intelligent children often do; she rebelled. She became a nurse and just as she was starting to make peace with her father he sadly passed away. I helped her deal a bit with that, I think. Just as she helped me deal with growing up in the opposite environment with my permissive hippie father. 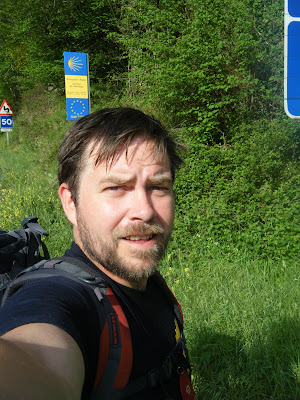 She didn't particularly enjoy being a nurse. She worked one summer and then quit. She opened a fashion-store that was rather successful, took a master in english litt. Did the runaway bride-thing a couple of times. Sold her store and ran away to France with her new boyfriend. And now she'd run away from him aswell.
You might think it sucks to be unpopular with the opposite sex. Eva is living proof that it sucks to be popular aswell. Proving, perhaps, the Buddhas theorem of Suffering. 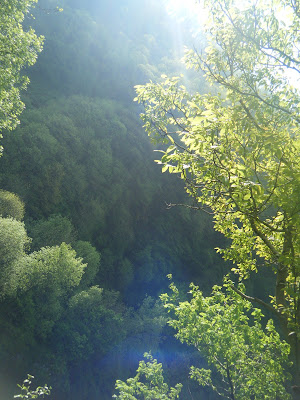 She'd started writing and somehow someone in publishing had gotten to read some of her stuff; and she was under contract to write a book for them. Being afraid of happiness, being the runaway bride incarnate, she is ofcourse unable to finish her novel. I sort of hope she does though. 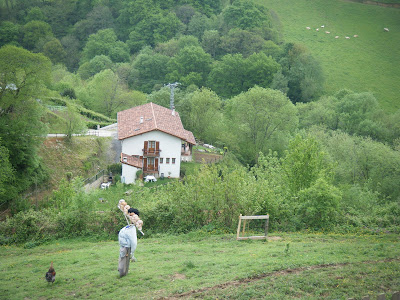 Lousy picture: but this scarecrow has seven heads. Its a scarehydra. They should have given it 10 horns. Just to fuck with people. Click on pic to enlarge. 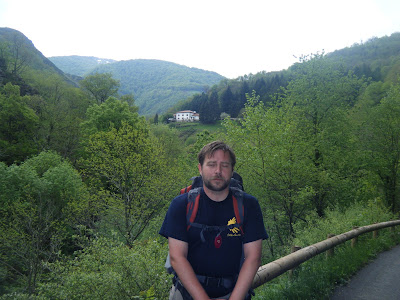 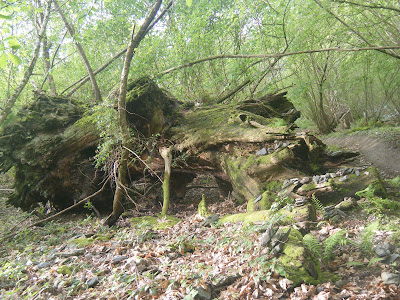 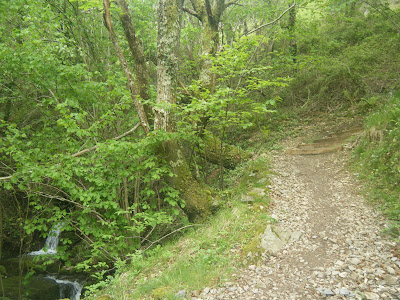 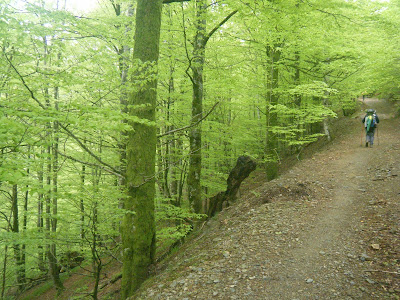 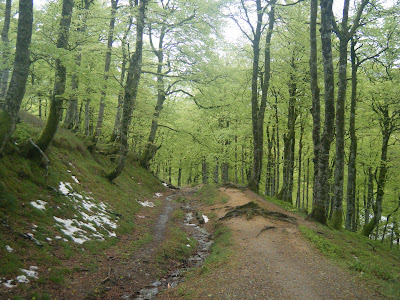 There wasn't much snow; and I was kind of upset that I'd taken the advice not to walk the Route Napoleon. But the next day I met an Austian peakclimber who's a way more experienced mountaineer than me, with better equipment and in a lot better shape - and he'd had to turn back. 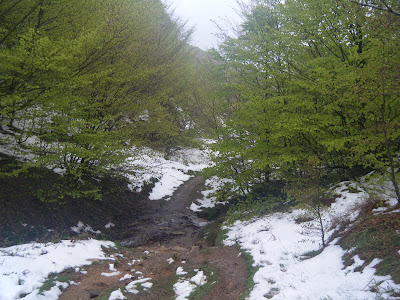 Taking this picture I realize I've forgotten my cane on the top of the pass. I turn back ofcourse.
Entrance to Ronchevalles. You just walk out of the forrest and in to the "village" - a monastery, a church and three restaurants. Very bureaucratic place. Julie and Eva was keeping a place for me in the monastery refugio - but as it was full I got a red ticket instead of a green ticket.
I went to the provisoric campingground with huts filled to the brim with weary travelers; accepting my lot. And then Julie found me and told me they'd saved a place for me in the monastery. But when I went there I couldn't have my bed because my ticket was the wrong colour. The hospitalero (who was behaving quite inappropriately towards Eva - something I'd soon stop being amazed and shocked by; and study with amazement instead) said to me Don't be angry. I answered I'm not angry, I'm just very very sad.
And I guess that got me in - because later in the evening he'd thunk better of it and gave me a place afterall. 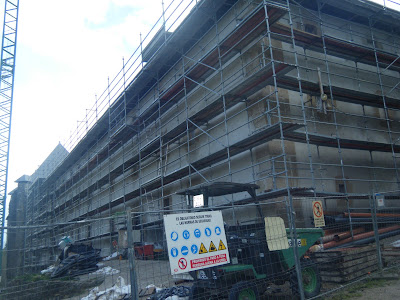 And for that I am eternally grateful to Jack. (Pictured below). Everybody who's done the camino for more than a week has some amazing story about the sleeping of sometimes hundreds of people in the same room. 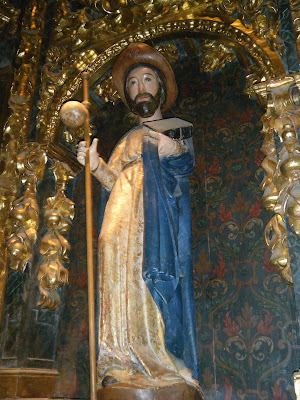 From the experiences of the sick fucks who can't stand the snoring and wakes everybody up by snapping their fingers, clicking their tongues and whatnot - to the guy who after stopping the guy in the bunk above him from snoring 10 or 15 times by gently pushing the mattress: simply got up and kissed the guy on the mouth - whence the snoring stopped completely for the rest of the night.
Maybe it was magic, maybe the guy simply was to afraid to sleep anymore that night. 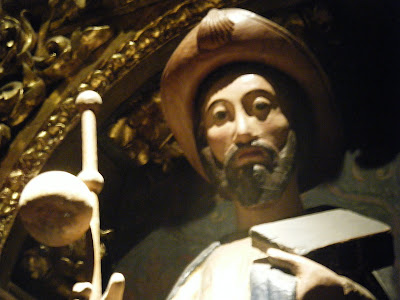 In the ancient monastery in Ronchevalles almost 200 people sleep in the same room. In the middle of the night I'm woken up by some guy talking in his sleep. A Spanish guy; I have no idea what he was talking about; even if it was at all coherent or just random words like the ones sleeptalkers often utter from their sleeping reptile brain who has little language and work with images, notions and feelings.
He wasn't really talking by the sound of it. He was pleading. For his life, his very soul perhaps. It was soulfull, heartfelt, truly like you'd imagine a broken and powerless Al Pachino or Brad Pitt would plead for their love and soul; and there was something very funny about it. I really had to hold myself from lolling.
Now, you might ofcourse think that this just proves what an insensitive jerk I am. And thats your prerogative. But I assure you: I was not the only one.
And to experience the muffled half strangled laugther of atleast a 100 people is a bonding and liberating experience. Really: I do recomend it. 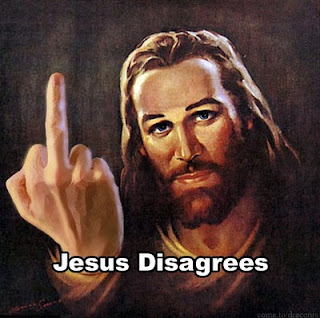 Jack disapproves.
Posted by MatsHanssen at 8.5.10