In the St.Jean Pied-de-Port church (or cathedral?) you can find this beautiful almost lifesized statue. At first glanse it simply looks like Mary gently stomping out evil (the snake) like you would a cigarette-butt - a gentle echo of the (for me) most striking scene in Mel Gibsons The Passion of the Christ. But then Alan More asks the question, concerning a similar image, in his new masterpiece Promethea

: Are she stomping out evil? Or are she growing out of the snakes head? Growing out of the imagination of the coiled one, much like many a female goddess (Aphrodite, Athene et cetera) have grown out of the heads of their creators? 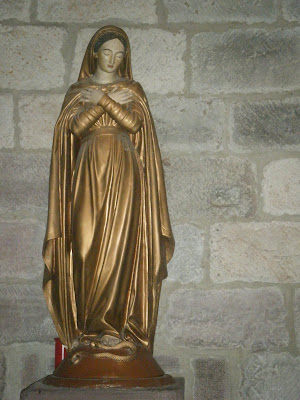 I guess I should have taken a picture of the long street in the old city of St. Jean Pied-de-Port. But, ofcourse, I didn't. In the very center of the city is a river - this crossing used to be one of the most perilous parts of the camino until the bridge was built sometime in the middle ages. The church is to the left - and the next picture is taken from that little landing just before the next bridge. 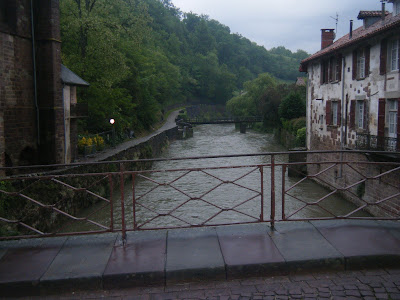 In the forresthill to the left you can find a small path going up to the fortress. It's a beautiful little climb, and a perfect secluded spot to have a picnic.
The Route Napoleon was closed because of snow in the passes, so I decided to stay another day - I really didn't want to walk by the highway 'cross the Pyrinees when Route Napoleon is rumored to be one of the most beautiful and history-rich (Napoleon, Hannibal ++) crossings in Europe.
Having to be out of the Refugio by 8 or 9 in the morning it was going to be a long day. 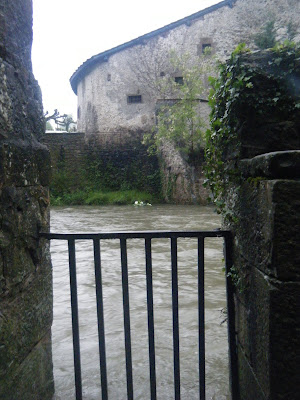 I spent a lot of time here; enjoying my morning cigarette and contemplating the pretty flowers dancing in the stream. I'm quite sure they are waterlilies. But man! When I see them I only think lotus. That flower used as the recurring image of the mind, the soul, in buddhist teachings due to its ability to grow unsoiled anywhere. No matter how harsh your conditions, how dirty a life you've led; there you are... unsoiled, white, perfect. 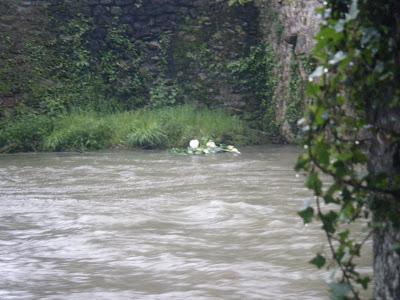 I spend most of my day trawling the shops of St. Jean - I need some equipment, and want to get to know what, where and how much. What I spend most time on - except simply walking around and getting to know the city - is whether to buy a guidebook or not.
At the pilgrimage-office (about 50 meters from the pilgrims-gate) they gave me two printouts: one of just about every Refugio between here and Santiago de Compostella with information on shops, bars, pharmacies & ATM's - and one printout outlining every (recommended) étape with graphic representation of the étapes climbs and descents. (I'll get some scans or photos of this later).
With this, in addition to the secret guidebook I was all set as to the basics. But a 'proper' guidebook would ofcourse provide me with recommendations on where to stay and what to see; information on the history and so on. But a 'real' guidebook would also tend to bind me. When I did the walk with my mother two years earlier I had watched with horror how she would study the guidebook at every break; unable to free herself and just be, just trust, just take it all in.
Without a guidebook I would loose out on a lot of things. I knew I would pass significant places without noticing, I would see this or that without appreciating the history of the thing, I would sit in a bar enjoying my coffee without realizing there was a legendary bar 150 meters down the road (and once you've had your coffee you walk on to the next town). Or I would pass places such as the waterfall of trials, the grotto of the  Virgen de Camino and so on and so forth. 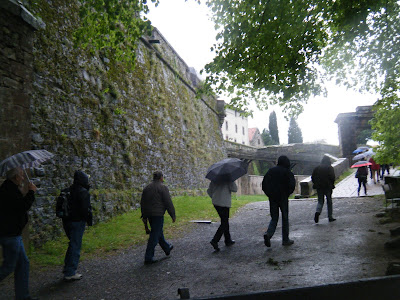 First show of turistas. Every day there were busloads of them rushing through the city; looking at the castle, the pilgrims-gate, the refugios, the church, at the pilgrims. Looking at me.
In the end I realized the question was what kind of pilgrim I wanted to be. Cultural or spiritual? I chose to be a spiritual pilgrim. I chose to trust in the Lord our God. I chose keeping my mind and soul open and alert for the little things that would guide me to the right places. I chose accepting that I wasn't meant to see what I didn't find; and I chose to truly appreciate the things I found and the things that found me.
I chose traveling without a guidebook. 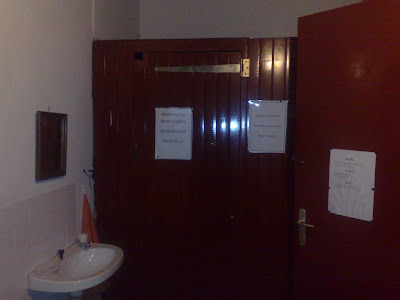 Not beeing allowed to stay in a refugio for more than one night I move to the first refugio down the road from the municipal for my second night in St.Jean-Pied-de-Port. Sadly the private refugio sucks - the Hospitalera [photo below] is a real bitch, and while it doesn't really show on the photo [above] there is one - 1 - toilette and one - 1 - shower. ON THE BALCONY! 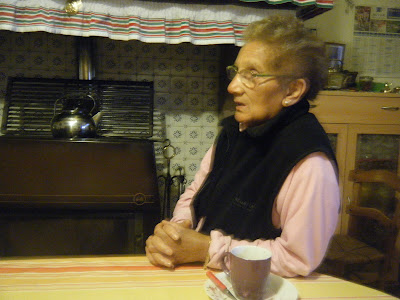 Local produce. Some spicy port-like fortified Basque wine. It was said to be best served chilled so I asked if I could use the fridge (normally there is a fridge for the pilgrims in these places - I had to use her private fridge). She seemed rather judgemental about the whole thing; a rather protestant attitude - but then again I'm sure they get all sorts in St. Jean Pied-de-Port, and I'm sure most of them (the worst of us) are gone by Pamplona. 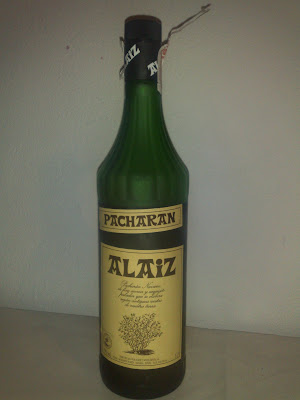 The next morning she liked me though. I guess she'd realized I'm a no-fuzz-guy even if my indjan blood and ptss makes me disposed to enjoy half a bottle rather than half a glass. She seemed quite the concervative; the mantleplace shrine (45degrees to the right of the pic below) was filled with Virgens, Christs and Saints. She was having quite the jovial conversation with the gay couple pictured below; telling all sorts of obviously very funny jokes in french, and my guess is she had no idea there where rainbow-people in her house and that she would not have been as jovial had she realized.
It was... moving to see the (assumed) pillowbiter stopping himself time and time again from touching his partner; realizing on his very first day that he was back in the old world: back where he would have to hide his true identity. 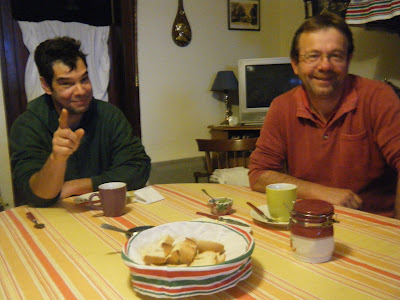 Assumed pillowbiter to the left. He's telling me not to publish his picture on the intarweb. I've been debating whether to publish or not for months now and doing it I feel like an asshole. I don't know that he is gay or what he was afraid of. Or why my guts tell me to publish - because this guy is the only one I'm publishing against his will - even including my totally unfounded speculations about his sexuality. I guess the homo-thing is the reason I'm publishing. I'll respect running from the law, living your life in the anarchist underground, proving that interdependency exists and all the reasons in the world. But being in the closet is just so 1990. 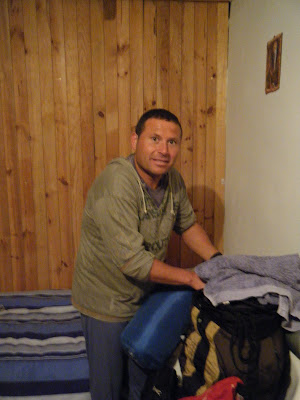 My roomie. Spanish guy. Nice guy. No english.
I love southern European kitch-art. It's not afraid of being sexy. Why O'why are the Scandinavians the ones with the reputation of being 'liberated'? Never will you find stuff like this in a Scandinavian home that doesn't display it in a self conscious, slightly ironic way - and even then will it be some kind of 30's negro girl and not something simply sexy like this or the almost CP-like piece I found in Mansilla de las Mulas. 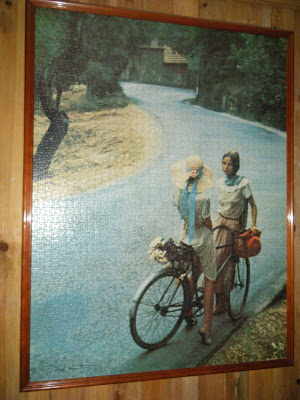 In the evening I went back to the municipal refugio where I spent the evening with two Norwegians - the only Norwegians I would spend an evening with until I was back in Scandinavia. The guy had that happy christian-thing going so typical for Norwegian pentecostals and such; that thing that makes you not want to believe in God.
But, to give him justice, to give them justice: charismatic, nice people. I think he had some sort of menial ordinary job; but I keep thinking of him like he was some sort of tv-preacher, a religious journalist. He had a very direct way of being, asked good questions and seemed to be on the path to wisdom.
When he asked me why I was going, and I answered, as I usually did, that I did the walk two years ago with my mother and that I'd realized I had to do it again and that I had to make it as long as possible; the conversation turned interesting and personal.
We had a nice long talk about parents. How we really love them even though they usually fuck most of us up. They do get blamed for that a lot. But really, I think it's life fucking us up. Your parents are only the first people having a proper chance of doing it.
Looking at him you'd think it was his mother that was his center-of-attention. But no, it was his father. 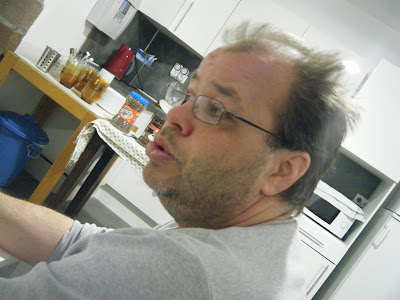 And sweet sweet... uhm... I forgot her name and never had the courage to ask again. I think it might be Margit or somesuch. We'd meet quite a few times along the road; even, in the end, in Finisterre. She was a slow but steady walker who'd walked all the way from Le Puy. An artist working with tapestries; a true pilgrim; a beautiful person with a beautiful smile.
She was carrying way to much though - but proof that just about anyone can do it if they just take the time and have the will. I hope I can find out who she is because I'd really love to see some of her art and I'd really love to see what the camino inspires her to make. 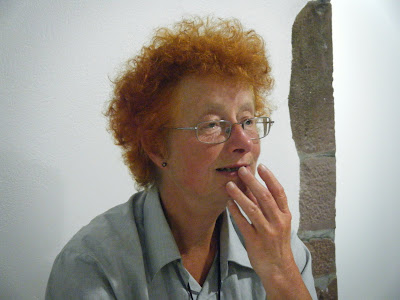