Interior from the Lesperon church. I can only assume that what appears to be a black painted satanic cross over the entry from the church's antechamber is supposed to represent St. Peter - the founder of The Holy Church of Rome - who infamously demanded to be crucified upside down; not being worthy to die the same way as the Nazarene.
I find it strange that an organization so preoccupied with symbolism would put Peters cross higher than the Lord's. I mean... they're infallible right? (And thus this little arrangement is full of meditated symbolism.)
For an introduction on how things came to be the way they are; how the Church of Peter became the one church I recommend reading Elaine Pagels The Gnostic Gospels 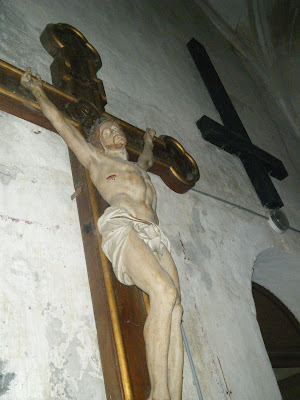 I prayed to the Virgin Mother. For wayfarers&pilgrims, for my loved ones, to wake stronger tomorrow than I did today. That kind of thing. 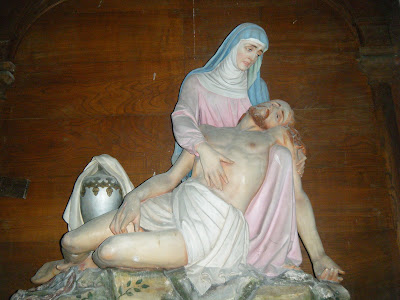 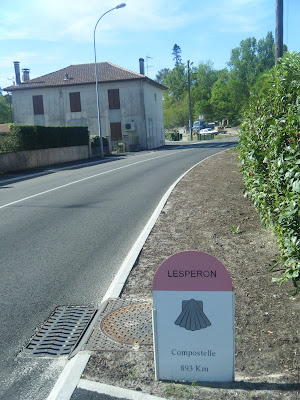 Their mansion was walled in, but the huge wellkept garden was in the public domain. Their dog was a bit upset that I was lounging on 'his' lawn - but after about 15 minutes of barking and me ignoring him and enjoying my lunch he gave up. I had a very nice nap, and when I awoke my sweatsoaked clothes were sundried. 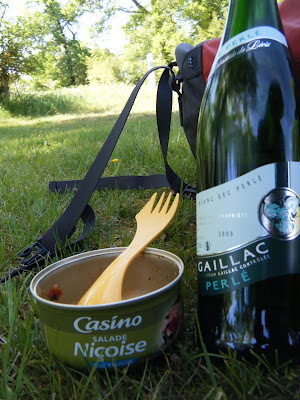 This guy had biked all the way from Belgium. We had a nice little chat; he took my picture and asked me to take his. Then he returned the favour and went on his way. 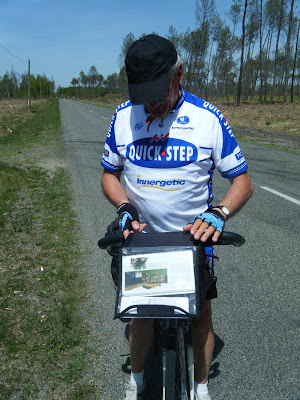 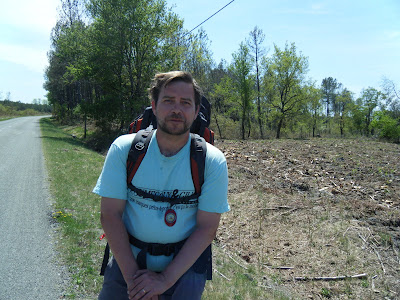 The landscape still wasn't encouraging - but it was definitely changing as I was moving into the Basque country. 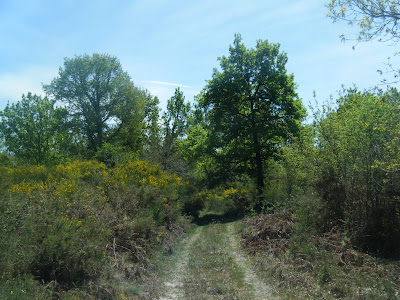 On my first camino in 08 my photocamera died after less than a week. For my birthday a couple of months before heading out my love gave me a shock and waterproof camera. On a little rickety bridge of planks and stone over a beautiful little creek in the shade of some old and seemingly very happy threes I was watching the newly hatched frogs playing in the stream while changing the compeeds on my blisters; when I decided to try out that waterproofness of my camera.
Success, but by the time I reached the ocean a couple of months later the "shockproof" camera was to battered to risk testing in the inviting Atlantic. 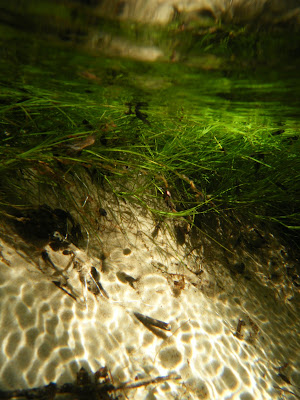 I don't know much French, but I'm pretty sure that sign in the top right of the picture means "In case of forestfire: Run really fast, maan!" It might also mean that you shouldn't make a campfire or throw your sigarettebutts around - although that's improbable: For sure they would just have put a sign with flames and an X over it like in the rest of the world. 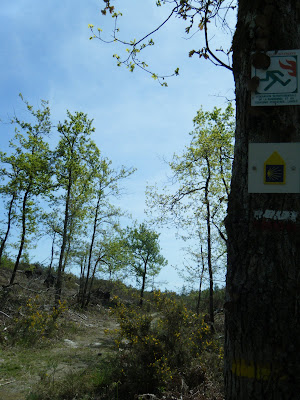 Looks like a nice little forest-road right? A lot better than walking along highways, right? But really, it was like walking on a beach. Without the cooling ocean winds. 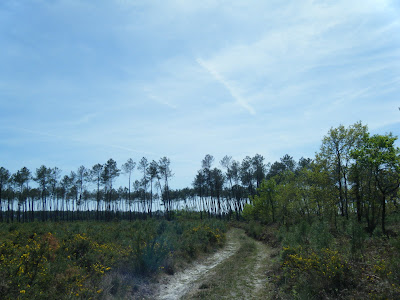 Outside the Taller church. 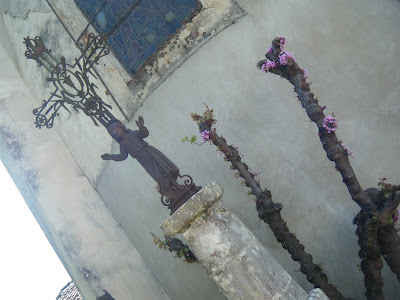 Now, being a cityboy and all, I'm not to sure about, you know, animals. But surely the boys have antlers and the girls not? And even if that's completely incorrect and they all have antlers and that is indeed not a post-op transsexual deerbuck exposing his beautiful pussy... and even though I'm very openminded and don't really mind bestiality at all (hey, whatever makes you happy baby!) ... that is a strange picture to paint on the wall of your house. 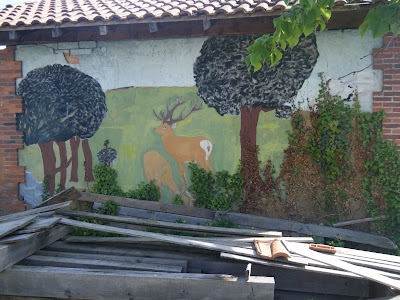 Click on pic to enlarge.
I don't know what they're advertising; but I love the design. 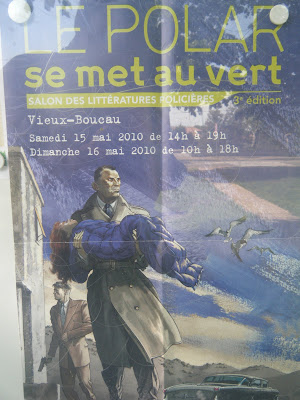 You can find these little "Reunions"-buildings in most French villages. I never asked anyone what they were; preferring my imagination to run wild. I pretty sure it's a very very happy place. 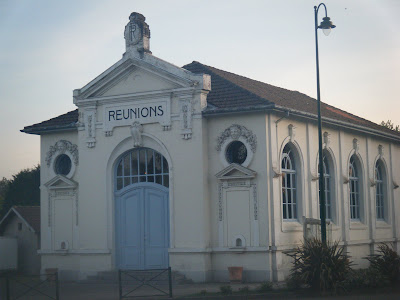 Foolmoon outside the 5€ refugio. I had, I must say, a nice but lonely evening. There were groups of pilgrims right ahead of me and right behind me - but I was blessed&cursed with having the road more or less to myself. 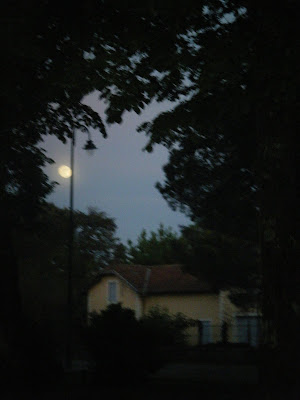