Sometimes I read obituaries. Not often. Maybe once or twice a year. I don't know many people, so theres not many people in my life that dies. But sometimes I do. I'm not sure why. Perhaps it's some morbid socialpornographic impulse. Perhaps it's a result of my fumbling attemts at bildung. Or maybe it is, as I tell my self, a meditation on the value of the singular life. 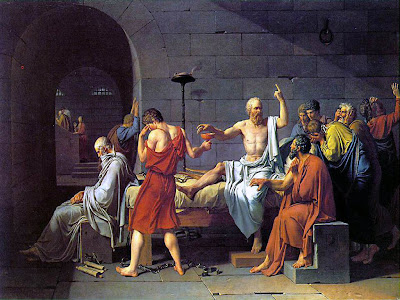 Jaques Louis David - Death of Socrates
So when a new republic article on the value (if any) of a liberal arts academic degree led me to Seamus Heaneys almost unreadable obituary on polish genious&1980 poet laureate Czeslaw Milosz... I decided to read it. I did'nt know him, I did'nt even know of him until now. But I think I might want to check out more of his stuff. The poem below is taken from nobelprize.org's page on him.

We were riding through frozen fields in a wagon at dawn.
A red wing rose in the darkness.

And suddenly a hare ran across the road.
One of us pointed to it with his hand.

That was long ago. Today neither of them is alive,
Not the hare, nor the man who made the gesture.

O my love, where are they, where are they going
The flash of a hand, streak of movement, rustle of pebbles.
I ask not out of sorrow, but in wonder.
New and Collected Poems: 1931-2001

Posted by MatsHanssen at 2.4.10 No comments:

David Disalvo has a nice article about 10 psychology studies from 2009 worth knowing about in trueslant.com. The one that really caugth my attention was his #4 - Playing Tetris may save your ass from psychological trauma and post traumatic stress disorder: 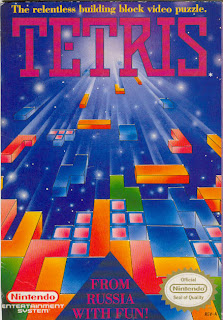 The short of it (or "abstract" as we like to call it once we have more than 15 years of schooling) is that your brain has a limited multitasking ability and the 6 first hours after a learning experience is vital to the formation of memories. Thus, if you have a traumatic experience you can hinder the formation of the kind memories that will provide you with neverending flashbacks simply by keeping your mind occupied on other stuff the first six hours after the traumatic experience. The study shows that your memory will not be affected, only the rate of flashbacks you will receive from your now damaged brain.
So to conclude the 'abstract' while you're waiting in the emergency room (or whatnot) don't mull over what happened, there will be plenty of time for that later, but engage your mind with a visiospatial stimulant like tetris (or whatever game like it you have on your cellphone). Your life will be better for it.
If you are interested in more on this you can check the whole article on plos one an open access, peer reviewed, international online publication. The study is done by Emily A. Holmes, Ella L. James, Thomas Coode-Bate and Catherine Deeprose at the Department of Psyciatry @ Oxford University. The study is based on two previous findings: 1. Cognitive science suggests that the brain has selective resources with limited capacity and 2. The neurobiology of memory suggests a 6-hour window to disrupt memory consolidation.
Posted by MatsHanssen at 2.4.10 No comments:

Veggies, jews and moslems beware!: Hemoglobin from pigs-blood is aparently used in the filters of sigarettes. They claim it is because of the hemoglobins ability to remove certain damaging substances from the smoke before you inhale it - but obviously it is a conspiracy to doom all true belivers to hell.

You will all burn! Mohahaha!
Posted by MatsHanssen at 1.4.10 No comments:

Brian Woods Northlanders is a mostly anglo-oriented take on the viking era with stories spanning from the 700's to the 12th century. Its good shit, my only objection is the authors complete disregard/lack of knowledge of the fact that to the vikings  the raidings were as much a religious war as it was about having some fun raping and pillaging. But, I guess, you cant have it all. 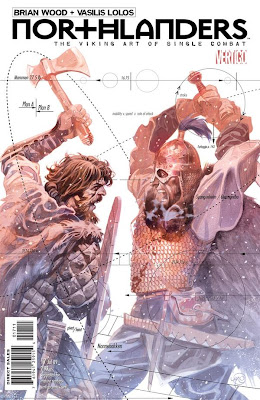 So while I would love to read some stories about Olav the Traitor (i.e St. Olav the Holy) who sold his country to to the church for the privilege of wearing a crown and stories like that; Northlanders is great entertainment - escpecially for sword&sorcery-fans who can do well without the sorcery
Posted by MatsHanssen at 1.4.10 No comments:

So you thougth the military-industrial complex was run by corporate america? Army @ Love Vol. 1: The Hot Zone Club

is the first season of a satire of the war in Afganistan set "a few years from now" when 'corporate middle america' is drafted into the war. The war is subsequently sold as something sexy with the I LOVE WAR equiliant of the mile high club: namley the Hot Zone Club. How do you become a member? Well, you simply do the dirty under fire. 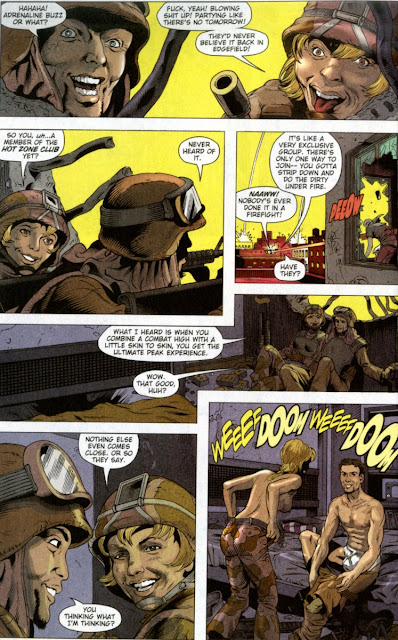 I would not be surprised if the series in later years will be most famous for the term "Generation Pwnd" [Generasjon Eid] - what better term for the poor fuckers who will have to clean up the mess of our parents?
Posted by MatsHanssen at 1.4.10 No comments: 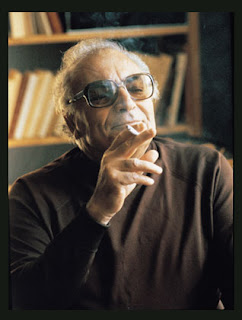 I just finished my 1975 Norwegian edition of Yasar Kemals out of sale novel The legend of Ararat. It's a good book, but I'm guessing it won't be republished anytime soon. It did make me curious about Memed, My Hawk

though, which was the main reason he was nominated for the Nobel prize in 1973. Check it if you're a fan of "arabic" storytelling with a social flair.
Posted by MatsHanssen at 1.4.10 No comments:

The comic series 100 Bullets written by Brian Azzarello and illustrated by Eduardo Risso ran from august 1999, and was completed at issue #100 in april 2009. The basic consept of the series is that somebody who has been wronged is given the opportunity of revenge. The character aptly named Agent Graves presents a person with a attaché-case with irrefutable evidence that this or that person is personally responsible for their now miserable lives, a untraceable handgun and 100 bullets. If they are caugth they will be releasead from police custody and all investigations stopped. 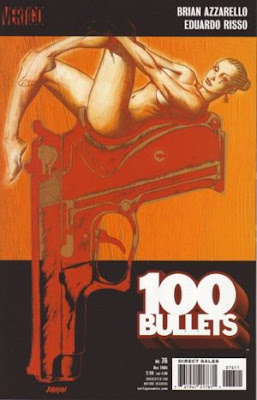 There are some great short stories exploring the morality of the thing (what would you do given the opportunity of revenge?); but the storyline soon expands (plunges in)to a dark plup-noir sort of x-files conspiracy plot. Even though it has the same writer through all its 10 years of running, there is a great variety in the quality of the series - from the not-so-good to the really really great. But over all it must be said that 100 Bullets is one of the best crime comics I've ever read - and since the series is ended it's quite safe to check it out by buying the first of the (13) trade paperbacks 100 Bullets Vol. 1: First Shot, Last Call.
Posted by MatsHanssen at 1.4.10 No comments:

I've been checking out an american rightwing/republican site called Sweetness&Light who publishes under the Matthew Arnold-motto "He who works for sweetness and ligth united, works to make reason and the will of God prevail."
They have interesting, biased and hard to verify articles like Taliban poisons 61 Afghan schoolgirls and Taliban killed civilians not US. Browsing their articles and disussion-threads I worry how they will survive as a nation when realities diverge as much as they do between the Republican and Democrat media. Maybe we should send some of the Scandinavian peace-aristocracy over the fjord to help them communicate and teach the art of discursive dialouge.
They worry for us aswell, about the way we conform to rules, our herd-like minds and our iminent capitulation to the kalif of Baghdad or somesuch. In a general liberty-and-no-socialism-or-wellfare-for-all discussion started by this raving review of the Frisian (Dutch) wellfare system in New York Times Magazine. Internett persona proreason puts the disucssion to rest may 7th 2009 4:56 "Frankly, the situation in Europe is another thing to be really scared about, as if Israel and Pakistan and The Moron’s criminal activities aren’t bad enough. Even though Europe has been pacifist for decades, historically, they are warrior cultures that have only become pacifistic after the cataclysms of WWI and WWII. At some point, the bills will come due and the shrinking native youth are going to realize that their backs are REALLY against the wall. They could choose to wipe out the Middle East and rub out their Muslim immigrant populations in wars that will make the 20th centrury look like sweet whisperings. You may laugh at the thought. But keep it in mind."
Another not-exactly-liberal page thats a littlebit more war-oriented than the Sweetness&Light-guys that worry whether they've become communist now that Obama's at the helm: is the Strategy Page with articles about Indian/Pakistani-tension, Burmas efforts to fake democracy, Talibans strategy and such.
Posted by MatsHanssen at 28.3.10 No comments:

Secret Wars originaly ran from may 1984 to april 1985; and in Norway as "Hemmelig Krig" in Edderkoppen [Spiderman] #9 1987 til #7 1988. I remember waiting impatiently for every new number, reading it in the shop if I did'nt have the money to buy it straigth away. When I happened to see the book (now dubbed "Kosmisk Krig" [Cosmic War]) on a recent trip to the library I felt compelled to borrow it. 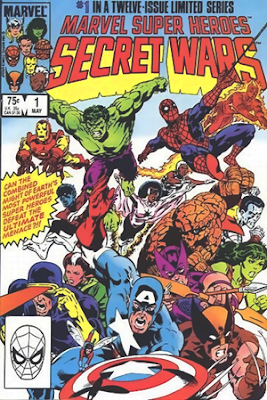 It started with DC beeing contacted by a guy who in a moment of deep insigth had understood that the stunning toys&dolls-merchandising success of Star Wars, Transformers, He-Man and such obviously could be transfered to Superman&friends. Whatever DC had, Marvel wanted. Toyproducer Mattel had He-Man (and Barbie...), but wanted superheroes aswell in case they would be the next big thing. BUT they would only make the deal if Marvel would make some extraordinary effort to hype the thing up.
And Secret Wars was the result of their deal.
This is pre-Watchmen material, "grapic novels" was something only high nerds would speak of, and motivated by greed the Secret War falls quite far below the quality lowmark of anything pretending to be smarter than Donald Duck these days. It has some sweet plot twists, some fine dialogue like Captain America stating that "Some of my best friends are people." - Secret Wars even have some interest as the first major crossover product; but still I think it is hardly worth reading even for those with a special interest. 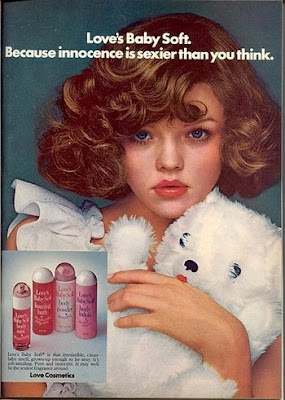 Ahh, 87-88, fifth grade, those were the days man! Everybody hated me. Kids know an asshole when they see one, grownups are easier to fool. My body was changing; I was still playing with Transformers and whatnot, afraid of ghosts, a child in every respect - and yet I had the sexual urges of a grown man. To ride that beast is like riding a wild horse; and I've heard more than one old man speak with gratitude of the sunset years and the taming of the horse.
It might be a spurious [s]existential link: But about that time when I was thrown on that horse and felt that intense urge for the union of two bodies&two souls... was also the time i first started to realize that I was alone, even midst family and friends. Unable to get a girlfriend (or boyfriend) I soon started to long for some kind of existential relief, even for death. Alternatly longing for death with childish suicide fantasies; and longing for that glorious union of love - preferably with me as the hero saving some girl I thought was cute at the time from super villians or Soviet terrorshocktroops.
... Yup, those were the days.
Posted by MatsHanssen at 28.3.10 No comments: