I'm finishing up my comic streak for this time. I realized many years ago that I'm one of those people who just can not own a television. When depression takes me I get to numb to do anything constructive (or really anything at all), and while television is a reasonable alternative to alcohol&ganja it really makes you feel like a fucking looser when you one day wake up and realize you just spent a few months watching mindnumbing drug-of-the-nation crappola and that you will never ever get those days back and you might as well have been fucking dead.

So, without television to fuck me up, and with a sort-of-balanced relationship to drugs, I tend to read a lot. But when my mind get that depression-stupid it can be really hard to read 'proper' books (or even watch movies since I have a very low stupid-tolerance) --- and thats when I turn to comics. Intelligent and easy - just like we all want our entertainment to be.

I guess I'm emotionally still in comic's mode. But I'm leaving for Santiago de Compostella in 36 hours, hopefully to be redeemed and cured; or atleast not more fucked up than I was before I left and in better shape. So my comic streak is over wheter I want it to or not.

So to conclude; to (get to) leave without any unfinished business: I think I should say some words about the books I for some reason or other have'nt been able to say anything about.

I've been reading the back catalouges of Heavy Metal Magazine

. Some insanley good shit there; but sadly most of it is hidden between stuff thats hardly worth publishing in a fanzine. I've only read my way up to 1982, so I might be back with more on this later - but basically I would only recomend reading all their stuff for ppl as fucked up as me, fantasy oriented artists and comic etnographers... For all others I'd recomend one of their best of collections like 20 Years of Heavy Metal

Hulk+Conan the Barbarian? Well, that would be World War Hulk

. Stay away, Marvel&Hulk fans only.

Ever since I read Alan Moore&Dave Gibbons Watchmen

I've been totally in love with Moore - I've just never really gotten around to read anything of his work in a strucktured way. So the last month I've taken it upon me to check some of his work (other than the random stuff I've read of his like Swamp Thing

is Moores take on Jack the Ripper published 1991 through 1998. It's extremley thoroughly researched, but honestly I think it was a great waste of his talent and I felt quite disapointed after reading it. But if you are one of those with an interest in Jack the Ripper this one is for you.

(1988-89) is by many concidered to be Moores anti-facist tour-de-force, the 1984 of the comic industy and blablabla. But I find it to be pretentious, boring, badly told and damn it! Just-see-the-movie.

I've read the first few issues of Moores Tom Strong and I'm sort of in love with it - he plays a lot with what comics used to be before it became all about "Universes" some 30 years ago. I prefer longer epic stories, but the Tom Strong short stories are great - especialy for a comics nerd like myself. Lots of inside jokes here.

And lastly I've been checking the first few Issues of Promethea, and I can't wait to finish it. If you are a Sandman-fan I truly recomend it, cuz here we once again are playing with that frail veil between dream and reality - it promises to be a full package meta-experience and I will get back on this at a later time. This fall mayhaps.

Posted by MatsHanssen at 8.4.10 No comments:

Comicbook journalism, or more spesificly comicbook travelouges like Guy Delisles "comic" portrayal of his two months in North Korea is a sub genre I'm getting more and more intrigued by. On the recomendation of virrvarr I've just checked Joe Saccos early ninties Palestine - a not-so-funny comicbook or an illustrated indebth feature report. 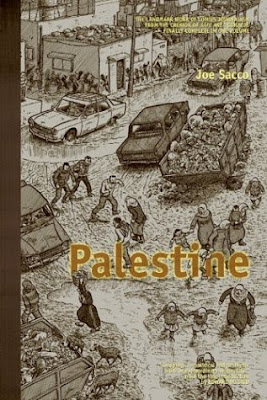 It's a stark portrayal of the sufferings of the Palestinian people, and I guess a good introduction to the horrors of their lives if you're one of those people who just can't get WTF the Palestinians are so angry about.

Sacco's story is a simple story. In one episode about the Israeli concentration camps/internment camps/jails he briefly touches by how new Israeli immigrants from the east (this is just a few years after the wall went down) are beeing conditioned to view the Palestinians as less than human in their mandatory military service. If it was my story I would use the opportunity to muse on how a common enemy can keep a people together; and how Israelis with their mixmash of cultures, 'races', economic and educational stratas most certainly migth need a little artificial glue to keep it all together. If I was feeling moral, as Sacco often does, I might even point out that thats even more psycopatic than anything the germans ever did and that Kant, Jesus and Jahve would be really really angry about that.

But, then, mr. Sacco never pretends to be a philosopher or social scientists - he is a journalist using the comic medium to tell his stories - or rather give his reports.
Posted by MatsHanssen at 6.4.10 No comments:

You'd think it was the ultimate plot ever - every male on earth dies minus one. Sadly it is not - but it definitly is a funny, thought provocing and intelligent piece of work. In the story the world very quickly falls apart without the men, I would almost say it is a dystopi a tad overdone - allthough you can always trust a woman to fuck it up: Lending the books at Bodø Bibliotek [Bodø Library] (which have not a single male employee) they, ofcourse, only had 9 out of 10 books. 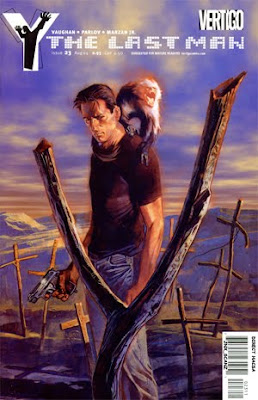 With my disapointment vented, I still must say it's a nice piece. The art is good, the litterary and pop-culture referances abundant, and it's really quite funny if you manage to get over the fact that the last man on earth is such a pussy my cock felt ashamed at times. Check your local library or bittorrent-site - or buy it at Amazon.com.

Posted by MatsHanssen at 6.4.10 No comments: